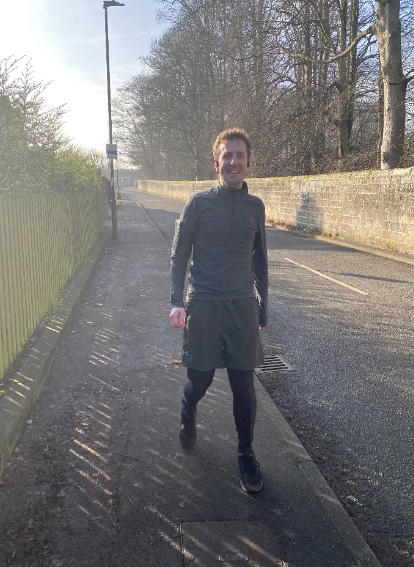 Stephen Reynolds was midway through a training run when he suffered a cardiac arrest at the roadside in Knaresborough. A passer-by, who recently had a refresher in CPR, started chest compressions until a paramedic arrived with a defibrillator. It took several shocks to get his heart beating again.

The Yorkshire Air Ambulance were dispatched and Stephen was flown to Leeds General infirmary, where subsequent scans revealed that Stephen had been born with a rare heart condition.

Stephen said: “Scans showed that I had been born with a rare congenital heart condition where my right coronary artery was positioned in the wrong place and it triggered my cardiac arrest when it became constricted during exercise. I was told it could have happened at any point in my life. I underwent open heart surgery to reposition the artery and spent a total of 3 weeks in hospital.”

He continued: “The air ambulance crew were quick onto the scene and instrumental in my treatment at the roadside as well as ensuring a quick journey to the specialist cardiology unit at Leeds General Infirmary.”

Stephen is now on the road to making a full recovery and has been able to start running again. At the beginning of July, Stephen completed the Yorkshire Three Peaks to mark one year since the incident and earlier this year, Stephen held a fundraiser to celebrate his 38th birthday and raised £1,500 for the rapid response charity.

Speaking of the Yorkshire Air Ambulance, Stephen said: “It was great to get the chance to meet Rachel, one of the Paramedics, last year at the Nostell air base to say thank you for the part she played in saving my life that day. I will always be grateful to her and the whole team at the YAA for the amazing work they did in helping me.”