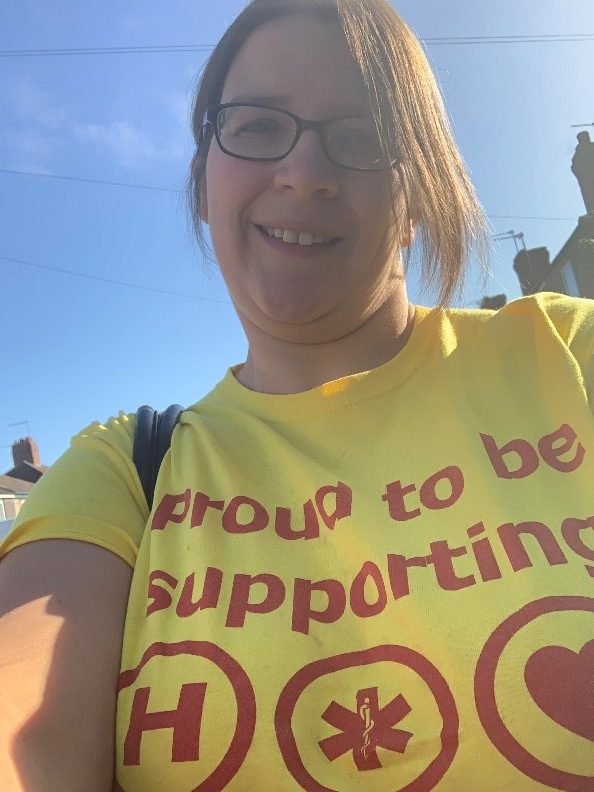 The Yorkshire Air Ambulance provides a life-saving rapid response emergency service 365 days a year to five million people across 4 million acres of Yorkshire and helping spread the word about the Charity is an army of dedicated volunteers.

To help celebrate National Volunteer Week, which commences on June 1st , the Yorkshire Air Ambulance (YAA) are shining the spotlight on just a few of the many volunteers which help keep the life-saving charity flying across the region.

Nichola Hawden has been volunteering for the Yorkshire Air Ambulance since 2018.  Her dad, Stephen Croft, was airlifted by the Yorkshire Air Ambulance after suffering a cardiac arrest pitch side at the Barnsley vs Burton Albion game in front of 11,000 at Barnsley’s ground on 22nd September 2018.  The incident was very widely publicised at the time due to it happening just prior to kick-off, in front of a packed Oakwell Stadium.

“The YAA played a huge part in saving my dad’s life and his incident is still very much on people’s minds two years later.  When I say I’m Steve Croft’s daughter, people tell me how much they remember the incident and then we’ll have a conversation about it”, said Nichola.

Nichola’s first event as a Yorkshire Air Ambulance volunteer was the ‘999 on the Moor’ event in Sheffield, organised in association with the National Emergency Services Museum.

“It was such a lovely event, everyone who came to the stall were so nice and wanted to chat, and I really enjoyed that part. The staff and volunteers were all so lovely and friendly, and it felt like I had known them forever. I felt straight away that I was part of the Yorkshire Air Ambulance family. I was hooked from there”, she said.

Speaking about what she enjoys about being a YAA volunteer, Nichola said:” I am a working mum, I have two young kids and it gives me some ‘me time’, not a mum or a boss. It also gives me the opportunity to have new experiences and meet new people.”

Being a volunteer for the Yorkshire Air Ambulance has also helped Nichola with her professional development, improving her presentation skills.

“One thing I have never really enjoyed at work is doing was presentations, so I wanted to do something to help push me out of my comfort zone and I’ve now signed up to do speaker presentations for the YAA”, said Nichola

When asked why she decided to become a YAA volunteer, Nichola said: “There was a number of reasons. Giving back after my dad’s incident was our first goal and we wanted to raise £12,000 to keep the air ambulance flying for another day, which we managed to achieve with the support of the football community. But then, the more I got involved, the more it meant something to me personally to give back and help the YAA for all the great work they do.”

She continued: “The Yorkshire Air Ambulance is a fantastic resource for the region, it can make the difference between life and death. The innovation and investment the charity makes, is absolutely amazing. We’re lucky to have the YAA in our region”, said Nichola.

To find out about volunteering opportunities for the Yorkshire Air Ambulance, please click here.