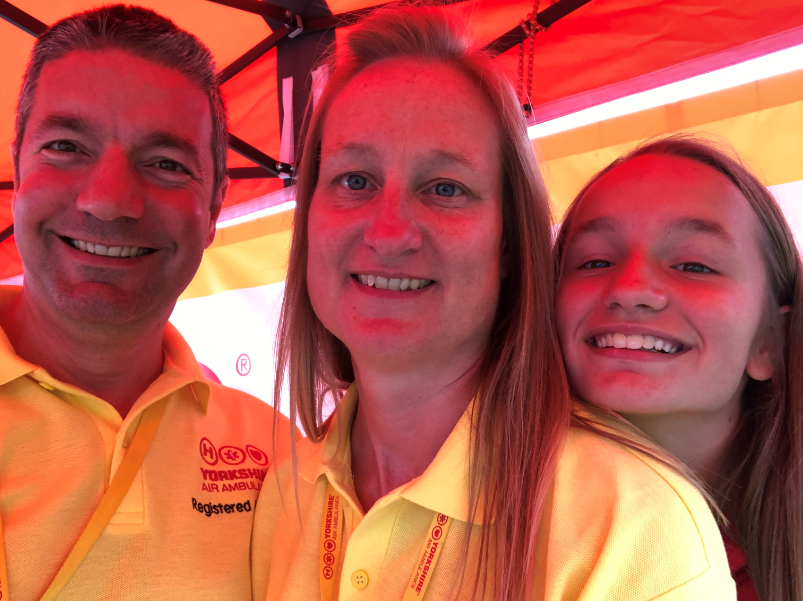 The Yorkshire Air Ambulance provides a life-saving rapid response emergency service 365 days a year to five million people across 4 million acres of Yorkshire and helping spread the word about the Charity is an army of dedicated volunteers.

To help celebrate National Volunteer Week, which commences on June 1st, the Yorkshire Air Ambulance are shining the spotlight on just a few of the many volunteers which help keep the life-saving charity flying across the region.

Former YAA patient Geoff Cook, his wife, Amanda and their daughter A.J, live in Pollington, East Yorkshire and have been volunteering for the Yorkshire Air Ambulance since the summer of 2016.

“Having directly benefited from the Yorkshire Air Ambulance charity, I decided to volunteer after understanding and appreciating what they represent”, said Geoff.

In 2015, Geoff was involved in a serious motorcycle collision in Goole, where his bike was hit by an oncoming car.

“I didn’t think such an accident would ever happen to me since I am advanced trained and always rode a well maintained motorcycle. I was literally broken and twisted in a ditch, with a severe bleed and many horrific injuries”, said Geoff.

The Yorkshire air ambulance arrived on scene with their Critical Care Team and stabilised Geoff before he was then flown to Leeds General Infirmary for treatment. Thanks to the fast response of the charity, he has now made a full recovery.

Geoff began researching about volunteering for the Yorkshire Air Ambulance whilst recovering from his incident and joined the charity in 2016, helping out on stalls and attending charity events.

“At first, all I was thinking about was repaying the money back to the charity for their service, but the more I got involved in volunteering, the more I realised that it’s not just about money, it’s about awareness and spreading the word about the charity”, said Geoff.

Geoff’s wife Amanda also registered as a volunteer after attending a few events with her husband. The pair began dedicating more time to the charity, as well as turning their family camping trips into fundraising opportunities, their daughter also became involved making volunteering a family affair.

“You can do as little or as much volunteering as you like and it can be very flexible, which really helps when you have a family”, said Geoff.

Speaking of what volunteering for the Yorkshire Air Ambulance means to him, Geoff, said: “There seems to be a genuine admiration back to volunteers from the crew. They do all the work on the frontline, but they really appreciate everything the volunteers do

“The Yorkshire Air Ambulance is YOUR Air Ambulance.  It is there to help the people of Yorkshire in their hour of need.  It only exists because of the incredible generosity of the very people that it serves”, said Geoff.

To find out about volunteering opportunities for the Yorkshire Air Ambulance, please click here.