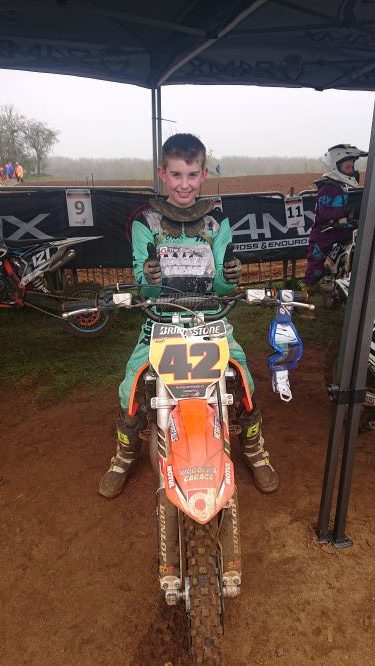 On the 4th May 2019, nine year old Rhys Whyment was visiting the Doncaster Fat Cat Moto Park racecourse with his family on holiday from Edinburgh, when he was involved in a motocross accident.

Rhys accidentally crashed his motocross bike and was flung into the pathway of another driver. His helmet hit the wheel of the other bike.

“I was watching from the side-lines and as soon as I turned around, I saw it happened. I rushed over to see what was wrong”, said Lee Whyment, Rhys’ dad.

Emergency services at Doncaster provided initial first aid, but worrying about the extent of Rhys’ head injuries, the Yorkshire Air Ambulance were called.

Rhys was flown to Sheffield Children’s Hospital, accompanied by his father Lee in the passenger seat.

Lee said: “The helicopter arrived incredibly fast and the female doctor was amazing. Rhys cannot remember being in the helicopter and he was sick, but the crew were incredibly helpful and made us feel at ease.

Tests at Sheffield Children’s Hospital revealed that Rhys had severe concussion and chest injuries.  If he hadn’t been wearing a helmet, the injuries could have been much worse.

Rhys spent four days in hospital and he is currently resting at home, but doesn’t need any further hospital treatment -luckily he is set to make a full recovery.

Lee said: “I hadn’t heard of the Yorkshire Air Ambulance before and didn’t realize they are a charity. I would like to thank them for being incredibly fast and efficient and for helping Rhys.”