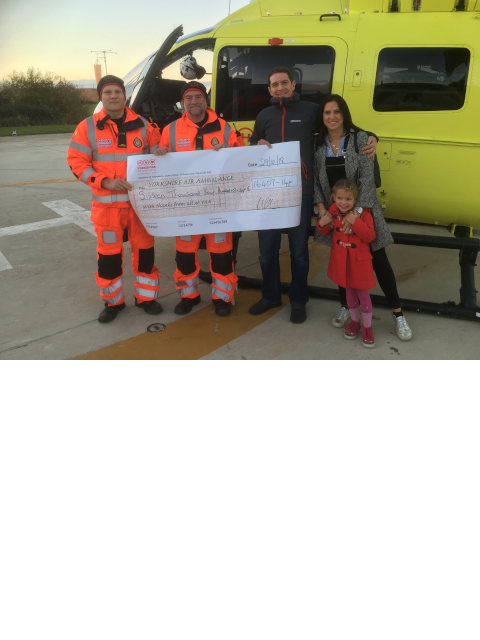 Paul Franklin, 41, from Knutsford in Cheshire, was a spectator at a motorbike rally in Scarborough in September 2017, when one of the competitors accidentally ploughed into him at 60mph after the brakes failed on his motorbike.

Paul was airlifted to James Cook University Hospital in Middlesbrough by the Yorkshire Air Ambulance, where it was revealed that he had fractured his fibula and damaged his liver, kidney and spleen. He also had a deep wound to his the abdomen, a cut to the back of the head and had a collapsed lung and 11 broken ribs, which meant that he couldn’t breathe.

“When I came round, I couldn’t breathe and I thought, this is it. I started thinking about my wife and daughter and it was them who gave me the determination to live”, said Paul.

In his younger years, Paul was a marathon runner and Doctors told him his love of fitness probably saved his life. “Doctors said to me that if I was a little bit younger or older, and if I wasn’t in such good health, I wouldn’t be here today”, said Paul.

On September 1st 2018, just under a year after his accident and whilst still receiving physio for a number of his injuries, Paul walked the Yorkshire Three Peaks to raise funds for the crew who gave him the vital initial treatment that saved his life. Paul raised an incredible £16,407.17 for the charity.

Commenting on the Yorkshire Air Ambulance, Paul said: “I find it staggering that such a vital service, that covers all of Yorkshire including the Dales, requires public support to maintain its operations. Without them there is a good chance I wouldn’t be here; without them hundreds of others would also be at great risk. They are an amazing service and I’ll be forever in their debt.”