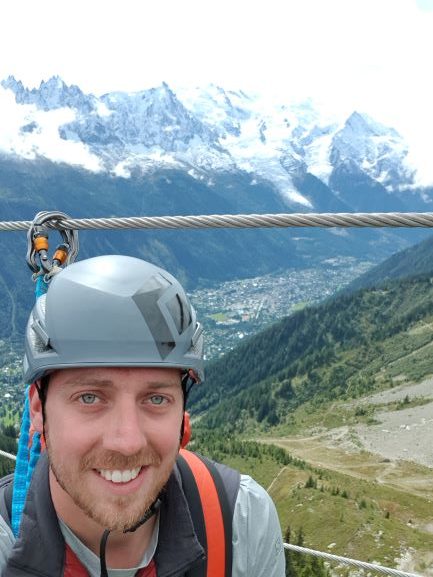 Experienced climber, Luke Dowling, aged 28, was out climbing the Cow and Calf in Ilkley on his birthday, when he slipped and fell almost 30 feet from the cliff face.

“I was climbing with one of my friends, he was ahead of me and I remember being in an uncomfortable position and slipping. I can’t remember anything else until I came round on the ground, it seemed fairly fast until the helicopter landed”, said Luke.

The Yorkshire Air Ambulance’s Critical Care Team, comprising of two paramedics and a consultant were dispatched to Luke’s aid to assess his injuries, alongside the Yorkshire HART team and the Yorkshire Ambulance Service.

After initially being taken to Airdale Hospital for tests, Luke was later transfered to Leeds General Infirmary after it was confirmed that he had fractured two bones in his neck and one in his spine ,which required specialist surgery at the Major Trauma Centre

“Up until the point they gave me the results of the scan, I was ready to walk out of hospital the same day, I didn’t feel any pain. I told them that I had a table booked for my birthday!” said Luke.

He spent six days in hospital and had three months off work. Despite his injuries being serious, he knows that it could have been worse.

Since returning to work, Luke is using his experience to warn other climbers to keep wearing their helmets.

Speaking of his accident, Luke said: “It’s probably down to a bit of complacency and bad luck, I think that’s where it went wrong. It takes two seconds to put on a helmet, I had it there and it was in the van. You just need to make sure you grab it every time.”