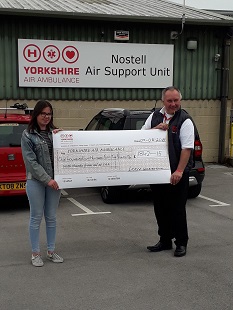 When the Yorkshire Air Ambulance flies into Pickering, the local residents know that it is more than likely to be for one particular person, Libby Waterton.

Libby, 14, suffers from a rare condition called Idiopathic Anaphylaxis, which causes severe allergic reactions.  Often there is no identifiable cause. Since the age of two, Libby has had over 160 episodes causing heart problems, difficulty breathing and swelling.

Due to the severe nature of Libby’s condition, and the urgent need for her to receive swift medical intervention as quickly as possible, since October 2017, she has been airlifted to hospital six times by the Yorkshire Air Ambulance from their small village in Pickering.

Frequent visits from the Yorkshire Air Ambulance means that Libby is now known pretty well locally, but her network of friends and the local residents have always made sure that they rally around for support.  She has also received a letter addressed from the House of Commons in support of her condition.

Keen to give something back to the charity that has saved her life on more than one occasion, Libby has turned her hand to fundraising and through a variety of events, including a bake sale and fashion show, she has now raised £1,558.55.

Libby has very little recollection of what happens during her trips on board the helicopter, but said she knows that if it wasn’t for them, she wouldn’t be where she  is now. “I really look up to the Yorkshire Air Ambulance and appreciate all the help from the medical staff that has been called out to rescue me.  I now want to be able to give something back and spread awareness about my condition to help others in a similar situation to me”

Karen Waterton, Libby’s mother, said: “We often get told that we should keep Libby wrapped in a bubble and not let her outside in case she has a reaction, but our priority is to ensure that she leads a normal teenage life as much as possible. We’re really proud of how she manages her condition, her ongoing positivity and the fact that she has raised so much money for such an important cause.”

Libby and her family are now working with doctors in the U.S to gain further insight into her condition and are currently training their new puppy, Bailey, to be Libby’s medical assistance dog to hopefully help manage her condition in the future.