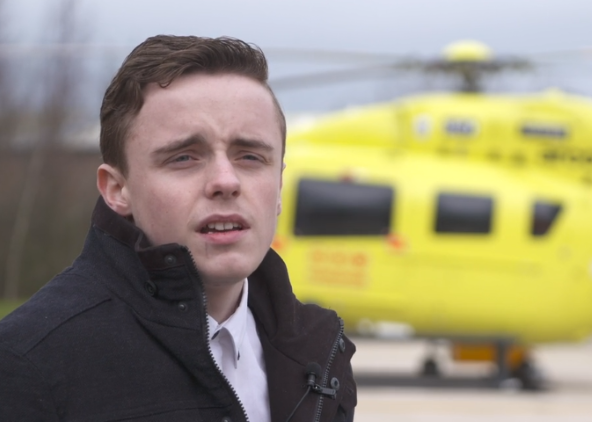 Lewis Foster, 17, from Hull, was following in his family’s footsteps by learning to ride a motorbike.  On the 20th September 2019, he was out riding with his ‘L plates’ on when he was knocked off his motorbike at a junction close to Catwick Lane near Hornsea by a car.

Passersby stopped to help, 999 was called, and the Yorkshire Air Ambulance were subsequently dispatched. As his family arrived at scene, the YAA Critical Care Team decided, due to the seriousness of his injuries, to put Lewis into an induced coma to protect his brain. He was then transferred to Hull Royal Infirmary by road ambulance accompanied by the YAA Doctor and one of their Critical Care Paramedics.

Speaking of his injuries, Lewis said: “I suffered from a traumatic brain injury, a fractured neck and skull, a lacerated liver, I shattered my pelvis in five places, broke my arm in two places, dislodged and my burst bladder and sustained soft tissue damage.”

Lewis spent seven weeks in hospital and underwent two major operations. He still has a long road of recovery ahead of him, and is scheduled to have more reconstructive surgery. Doctors have told him it could be up to two years until his brain fully heals.

Dr Chris Srinivasan, the YAA Consultant who attended Lewis at scene, said: “Lewis’ probability of survival was 35% so the fact that he’s here today is incredible.”

The impact of the incident has weighed heavily on Lewis’ family’s minds.  “I come from a family of bikers and the incident has stopped all my family doing what they want to do, but I’m hoping in time they will return”, said Lewis.