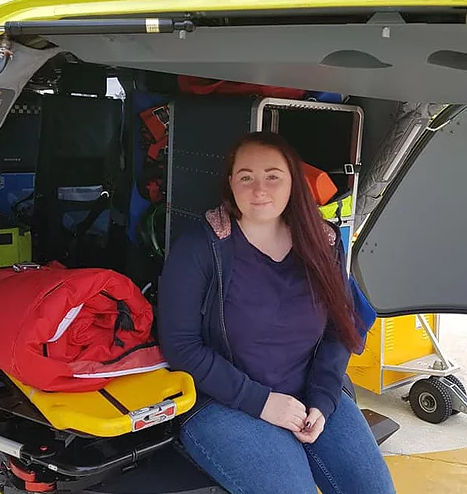 Laura Warburton from Barnsley, was on her way home from a nightshift when she was involved in a life changing road traffic accident.

“I have no memory of the accident, nor being in the Air Ambulance, A&E, resus, intensive care or surgery. I was conscious, but I can’t recall anything prior to being on the high dependency unit”, said Laura.

The Yorkshire Air Ambulance flew Laura to Leeds General Infirmary, where it was revealed that Laura had fractured her wrist, hip, femur, neck and ankle and suffered a bleed on the brain.

Laura spent three and a half weeks at Leeds General Infirmary and was then transferred to Barnsley District General Hospital.

During her time in hospital, Laura underwent three surgeries to fix her wrist, hip and femur and spent 10 weeks in a neck brace to protect her neck fractures.

After being discharged, Laura was unable to weight bear for three months and the only way she was able to get around was by using a wheelchair and being transferred in and out of bed using a transfer board.

Laura still has a long way to full recovery, but so far is doing incredibly well and most importantly, she’s now able to ride her beloved horse Harvey again.

Speaking of the Yorkshire Air Ambulance, Laura said: “I will be forever grateful for their service. Sammy, Al and Elaine, you are my absolutely heroes.”