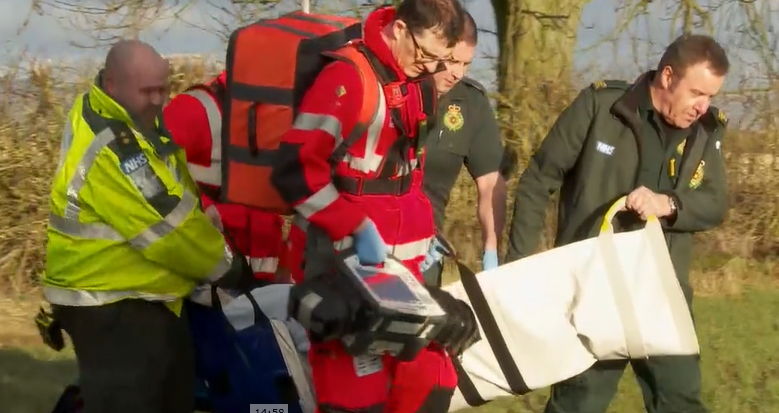 Ken Allanby, 75, from Baldersby, North Yorkshire, always led an active lifestyle riding motorcycles, cycles and walking with his family. He had always been generally fit and healthy, until one day he suddenly suffered a serious heart attack.

Catherine, Ken’s wife, had just returned home from walking their dog when her husband started complaining of chest pains.  She left the room to book him a doctor’s appointment, but when she returned, his condition had rapidly deteriorated.

Catherine, a retired nurse, said: “He suddenly went grey and started gasping for air. As soon as he started crying I knew something was wrong and he told to me call an ambulance.”

Paramedics who were first on scene assessed Ken and told him that he would need to go to hospital for some bloods tests. However, moments later Ken went into cardiac arrest.

The Yorkshire Air Ambulance were immediately scrambled given Ken’s serious condition, and when they arrived at Ken’s home, he was in a critical condition. Paramedics had already managed to restart his heart, but time was of the essence and he needed immediate transfer to hospital.

YAA medics helped to stabilise Ken then they flew him to James Cook University Hospital in Middlesbrough.  During the 15 minute journey, which would have taken 45 minutes on the road, the team were on standby in case of any further deterioration in Ken’s condition. Only 5% of cardiac arrests are successfully resuscitated, and Ken had already defied the odds earlier that day.

Luckily, Ken arrived at the hospital and was quickly handed over to cardiac surgeons, who managed to successfully remove a blockage from his heart, and he was well on the road to recovery within four days.

Since his distressing ordeal, Ken has been able to go back to the things he enjoyed doing such as riding his motorbike, but he also vowed to make sure he does 30 minutes of exercise daily to keep his heart healthy.

Catherine added: “The Yorkshire Air Ambulance and the local paramedics were absolutely fabulous. From the speed that they arrived, to how they handled the situation, you really couldn’t fault them.”