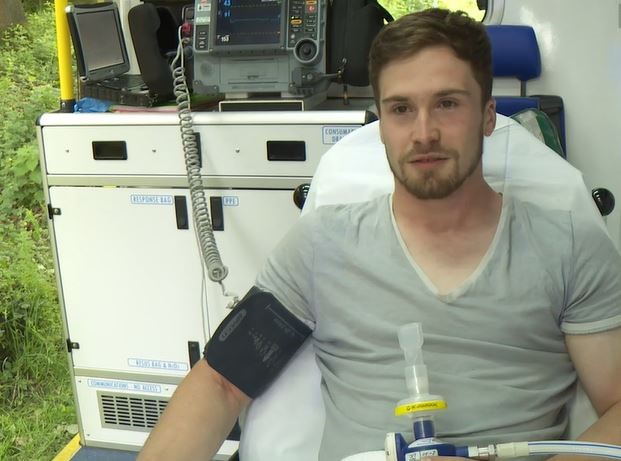 Josh Bowers, from Leeds was out climbing for the day with friends when he fell from a boulder and badly dislocated his ankle.

“I remember getting stuck near the top and eventually my arm got tired, so I aimed for the crash mat below and hoped for the best”, said Josh.

Lee Greenwood, Yorkshire Air Ambulance HEMS Paramedic said:” It was a pretty dramatic injury, his ankle was at 90 degrees.”

Josh was taken to Harrogate Hospital by road ambulance and discharged later that day. However follow up tests revealed that he had fractured the back of his foot and he was later admitted to Pinderfields Hospital for further tests.

Doctors warned Josh that he might not climb again, but thanks to extensive physio and sheer determination, Josh has defied doctor’s odds and he’s back doing the sport he enjoys.

“I was really concerned that I wouldn’t get back to doing my sport, so I ended up doing physio three times a day, every day for two or three months. I’m now back climbing twice a week at the moment and I’m happy to be back. I don’t want any more injuries though, I’m done with that.”

Speaking of the Yorkshire Air Ambulance, Josh said: “The crew were brilliant. I don’t remember much, but they got there quite quickly, which is great to say how remote the area is.”