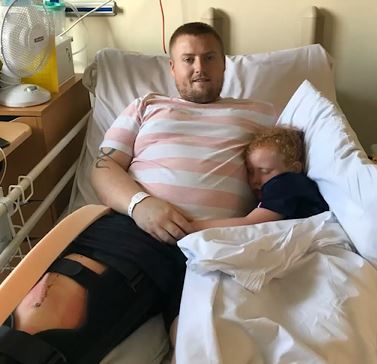 A man who was left paralysed below his right knee after he was thrown off his motorbike at 60mph is set to appear on Helicopter ER.

John Rae 27, from Newcastle was riding his motorbike down the A167 in North Yorkshire with a friend, looking for somewhere to go to have breakfast, when his motorbike collided with a car towing a caravan on a stretch of winding road. He was catapulted into the air at 60mph.

Speaking of his incident, John said: “We went to Richmond for a spot of breakfast, but it was too busy. I remember leaving Richmond and going over the zebra crossing towards Reeth and then I crashed seven miles further down and I don’t remember how I got there. I lost 20 minutes before the accident and the next thing I remember I was waking up in resus.”

A first aid trained teacher on board a school mini bus stopped at the scene to help and called emergency services. She removed part of John’s helmet to help him breathe, which is not normally advised in incidents like this, but it subsequently helped to save his life.

The Yorkshire Air Ambulance were dispatched and due to John’s critical condition, he was flown to James Cook University Hospital in Middlesborough for treatment.

Tests revealed that John had broken his femur and vertebrae and nerve damage left him paralysed from below his right knee. He spent three weeks in hospital being operated on and a further three weeks in rehab.

John was newly married and had to postpone his honeymoon to learn to walk again. He gave up his job as a taxi driver to focus on his recovery but has since started a new job in January.

“The air ambulance did a fantastic job, they were very professional and I couldn’t have asked for a better team to help me. It’s remarkable what they do”, said John.