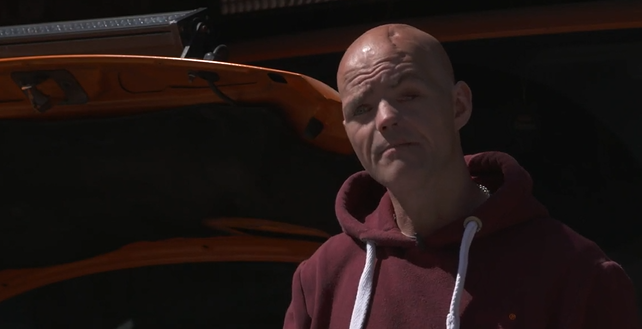 On June 17th  2019, James Gardiner, a motor engineer from Bradford was removing a tyre from a JCB when it burst, and fragments of rubber and wire exploded on his face.

Local paramedics were called to the scene and due to the severity of James’ injuries, the Yorkshire Air Ambulance, whose aircraft was temporarily out of action, dispatched their rapid response vehicle with their Critical Care Team consisting of an Emergency Consultant and two Paramedics. They were on scene within eight minutes of being dispatched.

Due to the explosion on scene, emergency services were forced to make a makeshift operating theatre at Golden Acre Park, where Yorkshire Air Ambulance crew assessed James and put him into an induced coma.

He was taken to hospital by land ambulance accompanied by the Critical Care Team to Leeds General Infirmary. Once he arrived, he was rushed straight into a 21-hour emergency operation.

Speaking of his injuries James, said: “I broke 31 bones in face including both sides of jaw, both cheek bones, half my nose and I had a very big hole in the top of my head. I have a 16 inch scar from bottom of my left lip all the way through to my left ear and I broke my left arm. I also lost four teeth and I can’t see out of my left eye. During my stay in hospital I received 72 units of blood.”

James spent seven months in hospital. He started out in intensive care and on a high dependency unit at Leeds General Infirmary then was transferred to Chapel Allerton hospital and did his rehabilitation at Daniel Yorath House.

It was the thought of being reunited with his wife and two young children, including a new-born baby that pulled him through.

“I could have died multiple times. My family were told that I wouldn’t be able to come home unless they had a bed and the house modified and they were warned that I might not remember my children or how to do my job. I’m very lucky that with the Paramedics and Doctors support that they were able to push me out of a hole and with determination I was able to get better”, said James.

Speaking of the Yorkshire Air Ambulance, he said: “I was blown away with their service. From the customer making the phone call to the air ambulance crew arriving was eight minutes. I’m amazed by them.”