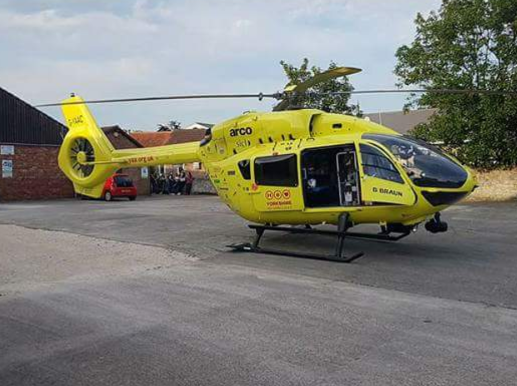 Jackie Cheetham, from Pickering, had been experiencing dizziness, chest pain and tiredness. A few days later, a routine checkup at her local doctors would reveal that Jackie had a life changing condition.

Jackie was booked in for an appointment with her GP on June 14th 2017 at Pickering Medical Practice. She said: “For two weeks I had been feeling dizzy every time I walked and generally feeling weird as if I just had no energy but the feeling would come and go so I ignored it. My kids kept begging me to see a doctor.”

During her appointment, the doctor checked Jackie’s blood pressure, which at the time seemed normal, until she was asked to stand up and her blood pressure shot up. Jackie was immediately given an ECG and asked to wait in a side room. Moments later, Jackie was told that she had a heart block and that the Yorkshire Air Ambulance were on their way.

“I told the doctor that calling the air ambulance seemed a little bit extreme. However, when the paramedics arrived and they did further tests, it revealed that my heart was only beating at 23 beats per minute”, said Jackie.

“When I was put on a trolley and taken round to the air ambulance, I felt like a total fraud as I didn’t feel that ill”, she said.

Jackie was flown from Pickering to James Cook Hospital in Middlesborough. That night, Jackie’s heart rate dropped to 20 beats per minute and she was rushed to theatre to have an emergency pace maker fitted.

Doctors told Jackie that she was lucky she got to hospital when she did because her heart could have stopped at any moment.

Speaking of the Yorkshire Air Ambulance, Jackie said: “There’s no doubt that the air ambulance saves lives, it helped to save mine that day. I cannot thank them enough.”