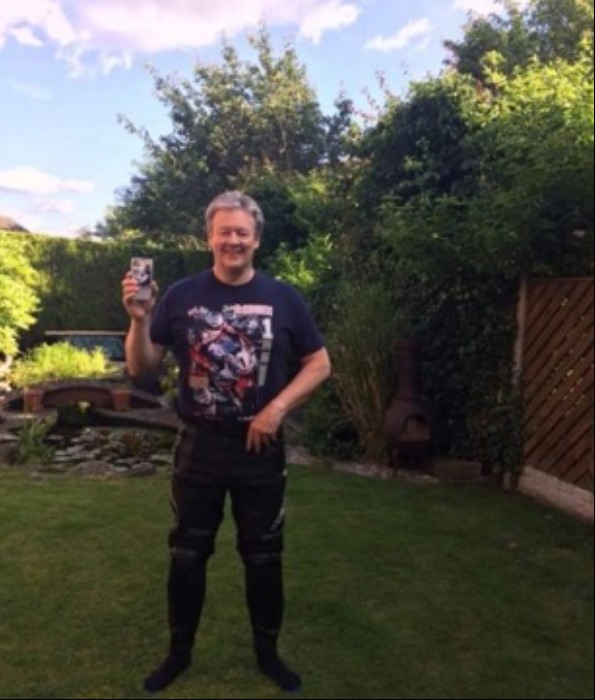 The wife of a patient responded to by the Yorkshire Air Ambulance has thanked the Charity for giving her a chance to say goodbye to her husband following a serious incident in Sherburn in Elmet on 18th October 2018.

Ian Stewart was on his way to meet a friend at Squires Café near Sherburn-in-Elmet when a car travelling at 50mph collided with him, resulting in Ian’s motorcycle skidding over a verge and into a tree.

Ian was a very experienced motorcyclist, having been riding since he was 16 years old. “He never stopped riding, even when the children came along. He rode modern and old bikes, which he really loved going out on”, said Fiona Stewart, Ian’s wife.

As local emergency services arrived on scene Ian went into cardiac arrest. Due to the severity of his injuries and his life hanging in the balance, the Yorkshire Air Ambulance was dispatched.

Once stabilised, Ian was flown to Leeds General Infirmary 20 minutes by air from where he had his incident. During the flight, the Yorkshire Air Ambulance CCT pumped blood into his body to keep his heart going. A full trauma team in RESUS took over as soon as he reached the hospital.

“I got the knock on the front door and was told we’ve been asked to get you to the LGI in Leeds as quickly as possible”, said Fiona, speaking of the first time she heard about Ian’s incident. Fiona was taken to Leeds General Infirmary, where she found Ian on life-support.

Sadly, despite the best efforts of those on-scene and at the hospital, Ian could not be saved and his life support machine was switched off. It was thanks to the Yorkshire Air Ambulance that his wife Fiona and their two children had the chance to say goodbye at his bedside.

Ian was a very active and outgoing person, who had not only a love for bikes, but also deep-sea diving, learning how to fly a plane and rugby. He was a semi-retired businessman who had been married to Fiona for more than 34 years.

“The doctors said there was no brain activity and asked for our permission to turn the machines off. In that moment I could have made a decision for him to live and for him to have been stuck in a wheelchair for the rest of his life.  But the decision to turn off the life-support was for him, not for me and his children and grandchildren”, said Fiona.

Fiona continued: “Myself and my two children were able to see him in the hospital and talk to him and share our last special moments with him. Which without the intervention of the medical team at the roadside, wouldn’t have been possible.”

Speaking of her husband, she said: “Ian lived life to the full. He certainly wasn’t a pipe and slippers man. He loved being out and about and his character was one everyone warmed to. He always had a smile on his face and made everyone laugh.”