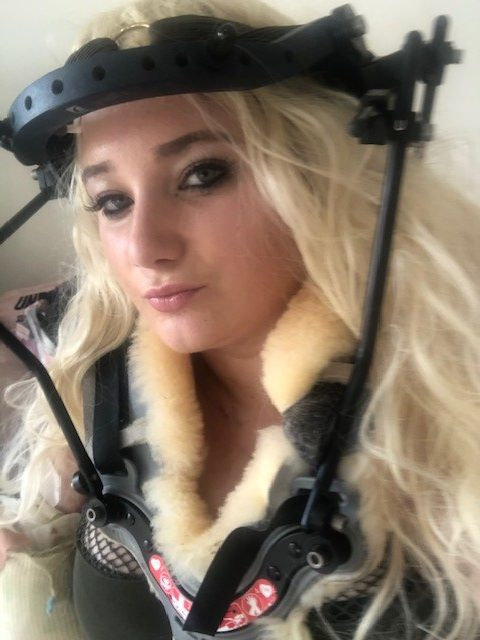 On August 26th 2019, Georgia Taylor, aged 20 from Longwood, lost control of her car when it hit the kerb on the Huddersfield bound carriageway of Manchester Road. The car flipped over a wall and landed on the roof, leaving Georgia and her cousin trapped.

“I remember walking my cousin up to see if she was okay. I was drifting in and out of consciousness until the helicopter arrived”, said Georgia.

The rescue operation took more than 2 hours and Georgia lost six pints of blood. Speaking of her ordeal, she said: “The air ambulance crew were reassuring and did everything they could to calm me down.”

Georgia was flown to Sheffield Northern General hospital, where she was rushed for emergency surgery to save her arm. Tests revealed that Georgia had also sustained a serious head injury and had broken several bones including her neck.

Georgia spent six weeks in hospital and has endured six surgeries, but thanks to hospital staff and Yorkshire Air Ambulance crew, her arm has been saved and she has been able to return back to work, and do the things she enjoys.