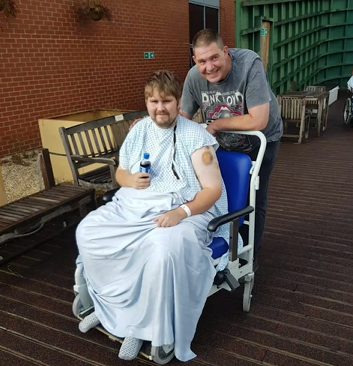 Daniel Howe from Mirfield, West Yorkshire collapsed outside the East Riding Leisure Centre on August 2nd 2019 and was helped by a group of passing tourists when they saw him having a seizure.  Moments later, Daniel slipped into cardiac arrest and emergency services, who had arrived on scene, started CPR.

The Yorkshire Air Ambulance were dispatched and Daniel was placed into an induced coma at the roadside and flown to Hull Royal Infirmary.

Tests at the hospital revealed that Daniel had a faulty heart value and he spent more than a month in a coma. He was then transferred to Leeds General Infirmary, where he began his rehabilitation and underwent two procedures, one to repair his aortic value and another to have an ICD fitted.

Daniel has been left with crippling anxiety and short term memory loss following his cardiac arrest and COVID-19 has delayed some of his treatment. However, he has been using lockdown as an opportunity to work on his fitness and has lost one and a half stone, which the doctor had advised so that he can have further surgery on his heart.

To give back to the charity that saved his life, prior to the lockdown, Daniel and his friends organised   a fundraiser at their local angling club and raised over £1,200.