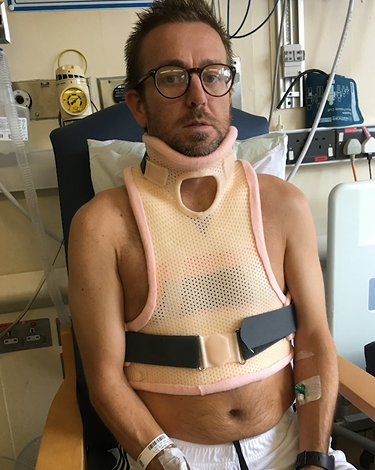 Dale Newman was cycling with friends at Gisburn Forest when the tyres of his mountain bike skidded on the grass and he plunged into a ditch.

“I don’t remember how I lost control. My friend didn’t see the accident either as he was a good 30 seconds behind me, he just found me lying there”, said Dale.

Dale’s friend Andy attempted to call emergency services, but due to the remote area where Dale had his accident, there was no mobile phone signal. Andy walked Dale to a nearby barn where they found a group of cyclists, including an off duty midwife who looked after Dale whilst Andy went to find signal and guided the medics to their location.

The Yorkshire Air Ambulance was dispatched and after assessing Dale’s serious injuries, they decided to fly him to the nearest major trauma centre at Preston Royal Infirmary.

Tests revealed that Dale had severely fractured his neck (he had split his C1 and C2 and crushed a number of his thoracic vertebrae’s, he had fractured his sternum, collar bone and also bruised his heart. He was 1mm away from severing his spinal cord, which would have left him paralysed.

Dale was in hospital for 11 days and his recovery has been a slow and painful process, but he’s now back at work and now almost fully recovered.

“I’m incredibly lucky that I’m going to make a full recovery, and I’ve taken a decision to use that drive and do everything I can in life now”, he said.