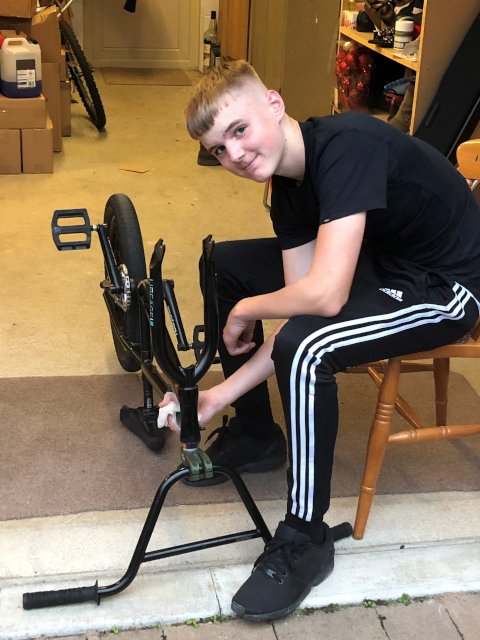 On the 12th January 2019, Charlie Starr, 15, from Nottingham was visiting the Doncaster Moto Park racecourse with his friend’s family, when he was involved in serious incident.

Charlie was filming his motocross training on his headcam when he went over a jump and his leg got tangled in the wheel of his bike.

Emergency services at Doncaster provided initial first aid, but worried about the extent of Charlie’s leg injuries, the Yorkshire Air Ambulance were called.

Charlie was flown to Sheffield Children’s Hospital, where his anxious mother, who travelled from Nottingham, was there waiting for him.

“I was just told, get yourself to Sheffield, the helicopter is landing with Charlie”, said Helen.

Tests at Sheffield Children’s Hospital revealed that Charlie had shattered his thigh bone and suffered internal bleeding to his spleen and liver.

Charlie had a rod inserted into his leg and spent eight months as an outpatient under the care of Sheffield Children’s Hospital learning to walk again. He is now fully recovered, but he has been advised not to get back on his bike.

“Charlie has always been accident prone and a bit of an adrenaline junkie, he already sustained an injury to his spleen prior to this accident bmx-ing”, said Helen.

She continued: “I don’t like holding Charlie back, but at the same time I want him to be safe. He was wearing every bit of protective gear that day. I can’t thank the Yorkshire Air Ambulance enough for their help.”