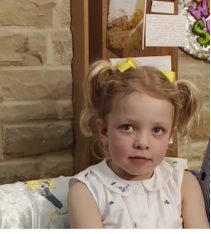 On the 24th January 2018, Beatrice Grenfell, aged five, from Whitby, was sent home from school due to feeling unwell.

“She was a little bit hot, but didn’t seem that poorly”, said Beatrice’s mother Vicky. “She asked to watch Chitty Chitty Bang Bang and she seemed okay.” Vicky briefly left the room and when she returned, she found Bea unconscious.

“When I came back into the room Bea had been sick and wet herself and she was staring blankly into space and was completely unresponsive. She then went into a prolonged seizure and began to turn blue”, said Vicky.

Vicky called 999 and the land ambulance arrived to assess Bea, followed shortly by the Yorkshire Air Ambulance. It was then decided that Bea would be flown to James Cook University Hospital in Middlesbrough, a journey which would take an hour by road, but took only thirteen minutes by air.

Bea was seen on the major trauma ward where she was put into an induced coma, then transferred into paediatric intensive care where she spent three days, whilst doctors worked on discovering what was wrong. A series of tests revealed that she had contracted Influenza B and RSV, both life threatening conditions in such a young child.

Luckily Bea made a full recovery, but in March, she received results from of her MRI scan and it revealed that Bea was showing signs of Neurofibromatosis type 1, which was one of many conditions doctors had been testing her. Further tests then went on to confirm she does have the condition.

Neurofibromatosis is a genetic disorder that causes tumours to develop on parts on your nervous system such as your brain, spinal cords and nerves and can lead to other chronic health conditions. It is often diagnosed in childhood and affects 1 in 3000 children.

“Bea’s diagnosis helped us gain some understanding into Bea, such as why she didn’t walk until nearly two and although she was a very active child, she struggled on long walks.”