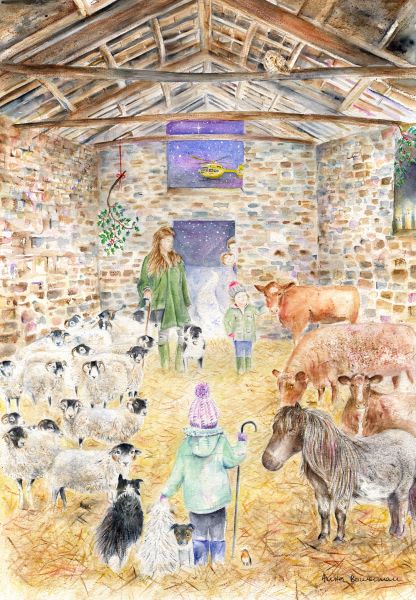 Yorkshire Air Ambulance ambassador Amanda Owen and her family are back on our TV screens and they are also the subject a newly-released charity Christmas card painted by a Harrogate artist.

The Yorkshire Shepherdess, who is followed by more than 1.5 million viewers in the second series of the Channel 5 documentary Our Yorkshire Farm, was the focus of a YAA charity card last year. Painted Anita Bowerman, it became the charity’s best-seller with cards flying off around the world. It showed Amanda surrounded by her beloved sheep and dogs on a harsh winter’s day.

This year’s cards have just been released and they’re already proving more popular than ever. Sold in aid of the YAA, all proceeds go directly to the charity.

Amanda said: “I am absolutely delighted to feature again on the Yorkshire Air Ambulance Christmas cards. Anita Bowerman is a fantastically-skilled artist who has a unique ability to be able to depict children and animals in wonderfully intricate detail.

“I am hopeful that these cards will go worldwide and raise much-needed funds for this incredible charity. 100% profit goes to the YAA.”

Amanda – a hill farmer, mother of nine, photographer, public speaker and a successful author – has become something of a celebrity. She lives with her husband Clive and their family at Ravenseat in Upper Swaledale, North Yorkshire – one of the highest, most remote hill farms in England.

She has always been a supporter of the work of the YAA, given the remote area they live in and nature of the work the charity undertakes, however it was an introduction through Anita that brought Amanda and the charity closer together.

Amanda explains: “I was contacted by Anita last year to ask if I’d be happy to collaborate with her and the YAA by painting me and my sheep as a scene for one of the YAA’s Christmas cards.  Obviously it was a real honour for me to accept, and the card went onto be the Charity’s best-selling Christmas card!

“I hear they were sending them out all around the world, and as far away as Canada!  We have then kept in contact since and when I was asked to be an Ambassador I was absolutely delighted – I genuinely couldn’t think of a better organisation to be involved with.  I was very emotional when they first asked me.”

Amanda added: “I am aware that living as remotely as we do the YAA is a vital service that can make the difference between life and death. We have had our fair share of medical emergencies, though are fortunate to have never yet ourselves required the services of the YAA.”

Anita said: “Painting Amanda and her family and animals is always such a joy. In the card you can see Amanda with some of her children, sheepdogs, a robin, Tony the Pony, an owl, a robin and much more. The holly hanging above them is kept in this ancient barn all year. The original painting is in my gallery in Harrogate – the Dove Tree Art gallery and Studio.

“It is a privilege to be able to support the vital work of the YAA through the sale of these cards and having Amanda as an ambassador is a bonus.”

Priced at £4 for 10 cards, they are available online at the YAA website https://www.yorkshireairambulance.org.uk/product/yorkshire-shepherdess-2/ or you can call in to Anita’s Harrogate gallery – see www.anitabowerman.co.uk for location and opening times.

Copies of last year’s card are still available to buy now through the YAA website: www.yaa.org.uk/shop .