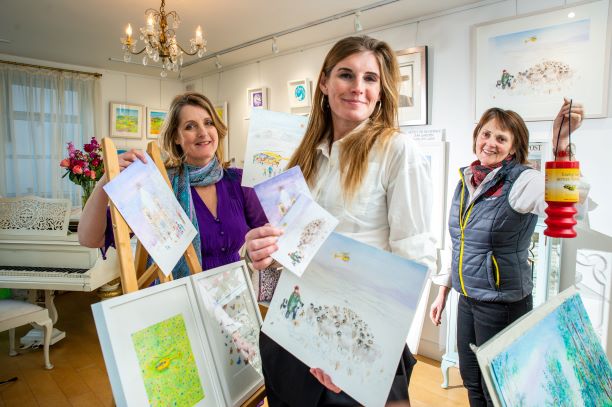 Amanda, 44,  is best known for her appearance in the ITV series The Dales, the Channel 5 series Our Yorkshire Farm and for being author to three bestselling books as well as being a busy mother of 9, was the face of one of the Yorkshire Air Ambulance’s popular Christmas cards last year, aptly named ‘The Yorkshire Shepherdess’.

She lives with her husband Clive and their family at Ravenseat in Upper Swaledale, North Yorkshire – one of the highest, most remote hill farms in England.

Amanda has always been a supporter of the work of the YAA, given the remote area they live in and nature of the work the Charity undertake, however it was an introduction through Harrogate based artist Anita Bowerman that brought Amanda and the Charity closer together.

Amanda explains “I was contacted by Anita last year to ask if I’d be happy to collaborate with her and the YAA by painting me and my sheep as a scene for one of the YAA’s Christmas cards.  Obviously it was a real honour for me to accept, and the card went onto be the Charity’s bestselling Christmas card ever!  I hear they were sending them out all around the world, and as far away as Canada!  We have then kept in contact since and when I was asked to be an Ambassador I was absolutely delighted – I genuinely couldn’t think of a better organisation to be involved with.  I was very emotional when they first asked me.”

Abby Barmby, Director of Marketing and Communications for the Charity added “Amanda is a truly inspirational women and one we are proud to have as an Ambassador for the YAA.  She is the true epitome of Yorkshire, which is something we as a Charity also embrace and are extremely proud of.  We are very excited to be working with Amanda going forward and already have some great ideas in the pipeline.”

Amanda added “I am very much aware that living as remotely as we do the YAA is a vital service that can make the difference between life and death. We have had our fair share of medical emergencies, though are fortunate to have never yet ourselves required the services of the YAA.”

Given the success of last years ‘The Yorkshire Shepherdess’ Christmas card, Anita Bowerman will paint a new scene depicting Amanda as part of this years collection.  However the design remains a closely guarded secret for now!

Copies of last years card are still available to buy now through the YAA website: www.yaa.org.uk/shop .

Yorkshire Air Ambulance (YAA) serves 5million people across Yorkshire and carries out over 1,500 missions every year. The charity operates two, state-of-the-art Airbus H145 helicopters and needs to raise £12,000 every day to keep saving lives.  The Charity are currently featuring in the television documentary series Helicopter ER, which airs on channel Really every Monday night at 9pm.