↓ Skip to Main Content
Home / News / Yorkshire Air Ambulance will be landing at the Brods!

Yorkshire Air Ambulance will be landing at the Brods! 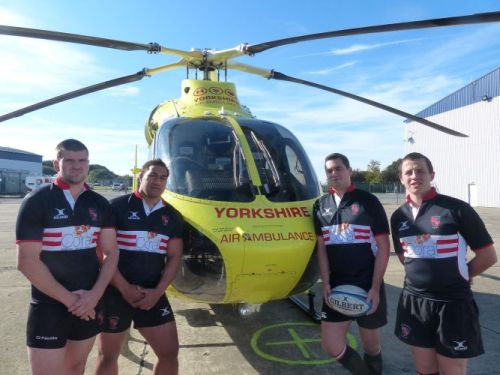 On behalf of the Old Brodleians rugby club and the Yorkshire Air Ambulance we would like to invite you to a fundraising event that is taking place here at Woodhead Park.

The Yorkshire Air Ambulance helicopter will be landing at the Brods at noon on Saturday 8th November – ahead of the 1st team cup match against Bradford Salem.

It promises to be a unique day at the club as members, friends and those from the local community are invited to meet the pilots and see the famous yellow helicopter up close.

Yorkshire Air Ambulance is the Brods official charity partner for two years and during that time the club has supported the charity’s awareness drive and pledged to raise an ambitious fundraising total of over £9990. As a result, we’ve place their logo on the first team kit, on boards around the main pitch and have so far raised over £4000 from events such as the annual Golf Day, charity matches and the Great Glen Challenge in which a number of our senior players took part last July.

The target of £9990 was chosen as that is the daily cost that must be found to keep their essential service operational.

So 'save the date' to meet the pilots, get your photo with the helicopter and throw any loose change into their buckets!

The first team cup fixture against Bradford Salem will kick off shortly after at 2.15pm and the usual gate charges will be suspended for the day. The gate will still be manned as usual in the hope that people will donate the normal entry fee to Yorkshire Air Ambulance.