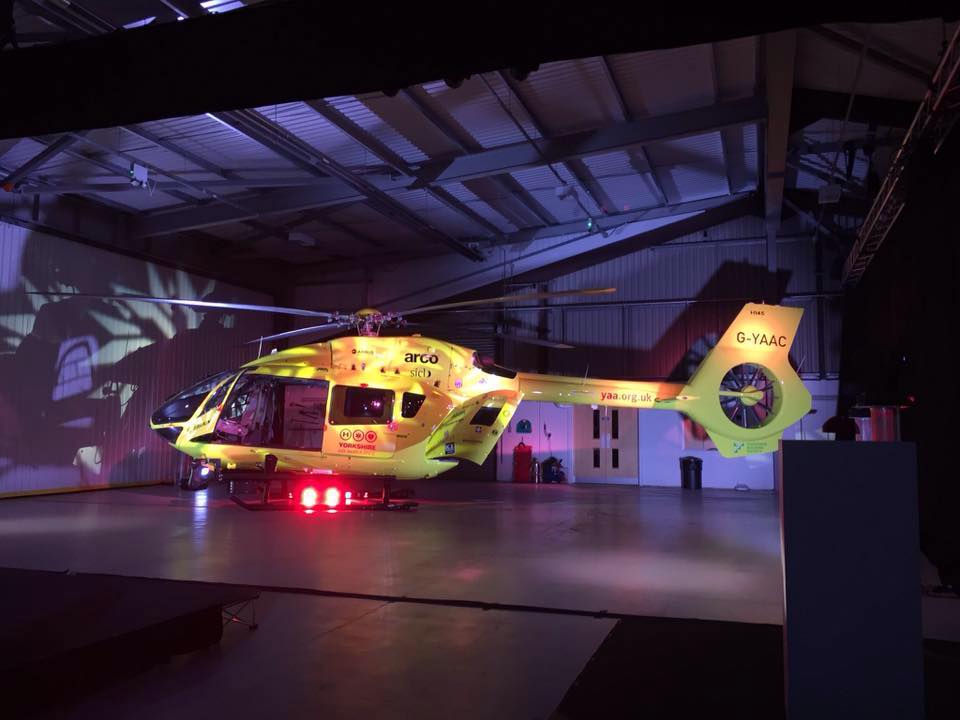 The rapid response emergency service is replacing both its current ageing aircraft – G-SASH and G-SEMS – with the latest generation Airbus H145 helicopter.

Geoffrey, who is a Yorkshire Air Ambulance (YAA) Patron, joined charity staff, supporters and volunteers to get first sight of the first of the new aircraft which flew into the charity’s Nostell Air Support Unit near Wakefield.

It will become fully operational in a couple of months following a full medical fit-out and crew training. A second H145 has been ordered from Airbus and will be in service by Spring 2017.

The new aircraft – each costing £6m – offer exceptional flight performance and will have significantly lower operational and maintenance costs. The H145 is night capable, enabling longer flying hours, and is used by military, police and air rescue services throughout the world.

Yorkshire Air Ambulance has been planning the replacement of its existing aircraft for several years. The purchase and fitting out costs have been met through planned savings, grants, careful budgeting and the amazing generosity of the people of Yorkshire.

YAA Chairman Peter Sunderland said: “This really is a landmark day for the charity and for Yorkshire. This amazing new helicopter is the result of the hard work and dedication of the tremendous team we have at the charity and the wonderful generosity of the people of Yorkshire.

“This helicopter belongs to the people of Yorkshire and will do for the next 20 to 25 years. I am very proud to say we now have a level of service which is probably the best of any air ambulance charity in the UK.”

Air ambulance doctors and paramedics have been involved from the start in the medical fit out of the H145s which provide a much larger cabin area to treat patients in flight, and will carry the latest medical equipment.

YAA Clinical Operations Manager Pete Vallance said: “The open cabin allows clinicians to have full access to the patient inflight and we have future-proofed the specialized medical equipment that is being fitted.

“We believe we have now got the best aircraft and the best equipment available to enable us to provide top-level clinical care across Yorkshire for many years to come.”

Yorkshire Air Ambulance still needs to raise £12,000 every single day to keep its helicopters flying. The charity serves 5million people across Yorkshire, attending on average, more than 1,000 incidents a year.

Its two current YAA helicopters, MD902 Explorers G-SASH and G-CEMS will have a phased retirement once the new H145’s are in operation and will eventually be sold to aid the replacement costs.

Paul Gowland, YAA Director of Fundraising, said: “For the people of Yorkshire to raise the amount of money they do to enable us to buy these new aircraft is just astonishing.