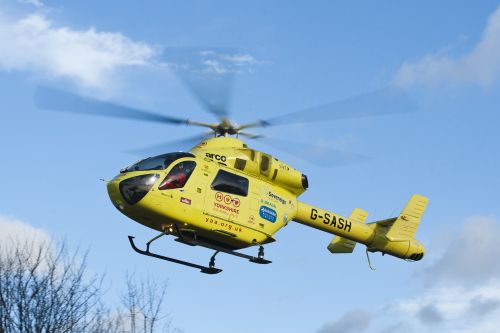 The Yorkshire Air Ambulance (YAA) has announced its operational plans during the Grand Départ when it is expecting to see an increase in its activity as well as busier operational periods.

Yorkshire’s only emergency helicopter service has announced plans to operate a third aircraft for the week leading up to the Grand Départ as well as over the weekend the event will be taking place, the 5th and 6th of July. The third aircraft will complement and assist the already established two helicopters that the Charity currently operates.

Speaking about their plans, the YAA’s Chief Pilot, Captain Andy Lister commented: “During the summer months, we always see an increase in our operational activities. As the population swells with tourists and local residents being on holiday, the likelihood of accidents happening increases, and in many cases, the air ambulance needs to be utilised. Not only will we have normal day to day incidents to cover, but we will also have the increased visitor numbers expected leading up to and during the Grand Départ in early July.”

Captain Lister continues, “Although the Tour de France provides their own medical assistance for competitors, there will be the spectators and the local people who live along the route, and this is one of the many reasons why we have taken the decision to bring in a third helicopter to give us increased cover during this period. There will also be access problems with roads being closed as well as much of the route travelling through remote areas of Yorkshire where access can also sometimes be problematic.

We will be working alongside all of the emergency services and mountain rescue teams during this period, with support as necessary.”

The two current YAA helicopters are based on the Nostell Estate near Wakefield and at RAF Topcliffe near Thirsk respectively. The third helicopter will be added to the fleet for the week preceding the start of the Grand Départ and cover the weekend during the race. Between the three helicopters, one each will be based from their current airbases, whilst the third helicopter will be operational from stand-by points at pre-identified and surveyed locations close-by to and along the route.

Captain Lister added “We have been extremely fortunate to have been offered great support from some local land owners who been very kind to allow us an area of their land to operate our helicopter from during certain stages of the race. On day one, we will be up in North Yorkshire near Richmond at Wathgill Camp, and on day two we will be close to the village of Ripponden near Halifax. We hope that by positioning ourselves close to the route we will be in the best possible position to respond to emergency calls.”

Director of Fundraising Paul Gowland adds “As many of our supporters will know, the YAA is an independent Charity needing to raise £9990 every day to keep our helicopters flying and helping to save lives. We have been overwhelmed by offers of fundraising support from businesses on the route, including public houses, campsites, shops and restaurants that are going to support us and organise fundraising events during the Grand Départ celebrations. We are constantly overwhelmed by the support we receive from the generous Yorkshire people and cannot thank them enough – we are looking forward to welcoming the Tour de France to Yorkshire along with its spectators, and showing them what a fantastic county Yorkshire is!”

Yorkshire Air Ambulance is an independent Charity providing a rapid response emergency service to the people of Yorkshire. Their two yellow helicopters provide air ambulance cover 7 days per week, 365 days per year. It costs £9990 each day to keep the Charity running, and with no direct government funding, relies on individuals, groups and organisations to help raise the vital funds required. The only help they receive is through the secondment of their paramedics from Yorkshire Ambulance Service NHS Trust.

If anyone is interested in supporting the Yorkshire Air Ambulance during the Grand Départ, please contact the Charity HQ on 01422 237900.