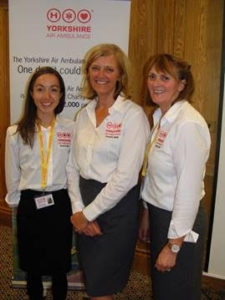 The event is part of a series of regional award ceremonies the Yorkshire Air Ambulance is running to thank fundraisers across the County for their dedication to the charity, with the main Yorkshire-wide ceremony taking place in October in Sheffield.

Regional staff selected eight of the most deserving solo and group fundraisers from the North Yorkshire region and awards on the day were presented by Peter Sunderland, Chairman of the Yorkshire Air Ambulance.

Helen Callear, Regional Fundraising Manager for North Yorkshire, said: “We have a lot of incredible, dedicated fundraisers in North Yorkshire and these awards have been a great opportunity to show our fundraisers & supporters how grateful we are for their hard work and helping us raise the funds for our air ambulance service which is vital in rural areas such as North Yorkshire”.

Michael Saxby, from Bedale, raised just over £6,500 walking events such as the Lyke Wake Walk with friends Anthony Soulsby and Andrew McDonald, and he also became an event volunteer during the Tour de Yorkshire. His award was collected by his son Robin on the day, who is aspiring to follow in his father’s fundraising footsteps.

Ellie Peacock, 11, from Bainbridge, suffers from Brittle Bone Disease and needed the help of the Yorkshire Air Ambulance when she was airlifted to hospital in March 2016 after breaking her leg. With the help of her friends and family, she raised £3,800 by holding a fundraising breakfast at their café in the village.

Harrogate based The Heritage Boys have been travelling around the UK and Europe playing hits from the 60s at various events, with all the proceeds going to the Yorkshire Air Ambulance. Andy, Ian and Peter, along with their manager Anne have raised over £19,000 since they began supporting the YAA.­­

Woodhouse Farm Holiday Park in Winksley, Ripon have raised just under £12,500 through fundraising events at the holiday park.  Marie Laverick and her team including one of the holiday park owners, Alison Laverick have been keen supporters of the Yorkshire Air Ambulance and have put a lot of work into increasing the awareness of the charity with support posters around the park. Events this year included coffee mornings and hog roasts around the Tour de Yorkshire.

Richmond Motor Group has supported the Yorkshire Air Ambulance since 2008 and have raised over £13,000. Funds were raised during the ‘Scott Trial’, one of the UK’s most challenging motorcycle trials.  The trial takes on 80 miles of cross-country racing in some of the most picturesque parts of North Yorkshire.  Funds are raised from the entrance fees for the event.

The ‘Early Birds’ swimmers are a group of swimmers who attend Knaresborough Swimming Pool at 7.30am most mornings for the Early Bird session.  So far they have raised £11,000 for the Yorkshire Air Ambulance by setting themselves swimming challenges such as swimming the equivalent of Loch Lomond.

Katy Hutchcroft-Stott from Stockton on Tees started raising money after she sadly lost her father in 2017.  Although the YAA were able to care for him and get him to hospital, Katy’s father sadly passed away the following day. Since then, Katy has raised £4,000 through a series of events held her at her pub, The Garrick Hotel, Teeside in her father’s memory.

Ian McDonough along with his family, and close friend Paul Arnold, raised more than £10,000 for the  Charity after Ian’s brother Pat died following a bike accident near Buttertubs Pass, where the Yorkshire Air Ambulance attended. Their first fundraiser for the charity was a 20 mile walk along the Cleveland Way, starting at the Ship Inn in Saltburn and finishing at the Angel Hotel in Whitby. They have since taken part in further walks, bike rides and held social events in aid of the Yorkshire Air Ambulance.

The event was hosted with support of The Devonshire Arms Hotel, who are currently supporting the Yorkshire Air Ambulance as their Charity of the Year.  Guests enjoyed afternoon tea at the hotel prior to the awards ceremony taking place.