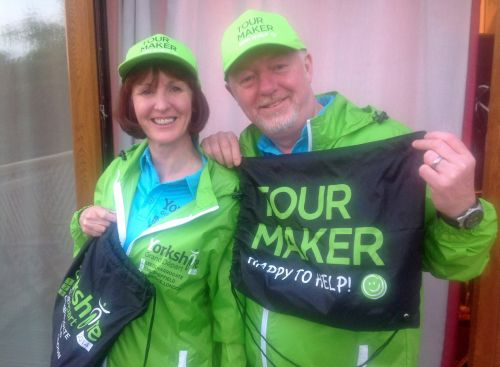 She will be in charge of a team of approximately 15 other volunteer Tour Makers on the first stage of the Yorkshire Grand Depart of the Tour de France which takes riders from Leeds to Harrogate.

And there’s Tour de France fever in the Massen household as husband Mike has also been chosen as a Tour Maker.

“I am a very proud Yorkshire woman and wanted to take the opportunity to be an ambassador for Yorkshire during this once-in-a-lifetime opportunity,” said 50- year-old Nicky, Regional Fundraising Manager for the Yorkshire Air Ambulance in West and South Yorkshire.

“I think the thousands of people who have volunteered wanted to make sure that people coming to Yorkshire for the Grand Depart get the warmest of welcomes and that people who live locally will also enjoy the experience of hosting this amazing event.”

The Tour Makers will be the volunteer force that will welcome millions of visitors when the Tour de France Grand Départ begins in, and races around, Yorkshire for two days and a third stage from Cambridge to London.

Nicky and Mike – a solicitor with Cohen Cramer in Leeds and a keen amateur cyclist – have now been kitted out with their Tour Maker uniforms – designed by Asda. The couple, from Wortley, Leeds, have now been trained for their roles and allocated different sectors of the stage one route on July 5.

Nicky added: “We are both very excited, delighted and honoured to have been chosen. The Yorkshire Air Ambulance has been actively involved with the Grand Depart preparations and also through the Yellow Yorkshire fundraising campaign on July 3, and so this is really the icing on the cake.”

Yorkshire Air Ambulance (YAA) has carried more than 5,500 people in its 13-year history. It needs to raise £9,990 each day to keep its two helicopters in the air and maintained – equivalent to £3.6 million each year.

The Grand Départ of the Tour de France takes place in Yorkshire on the weekend of the 5th and the 6th July. Stage 1 races from Leeds to Harrogate via the Yorkshire Dales National Park and Stage 2 races from York to Sheffield via Pennine Yorkshire and the Peak District National Park.

A third stage also takes place on the 7th July racing from the cycling city of Cambridge to historic heart of London before it returns to northern France.