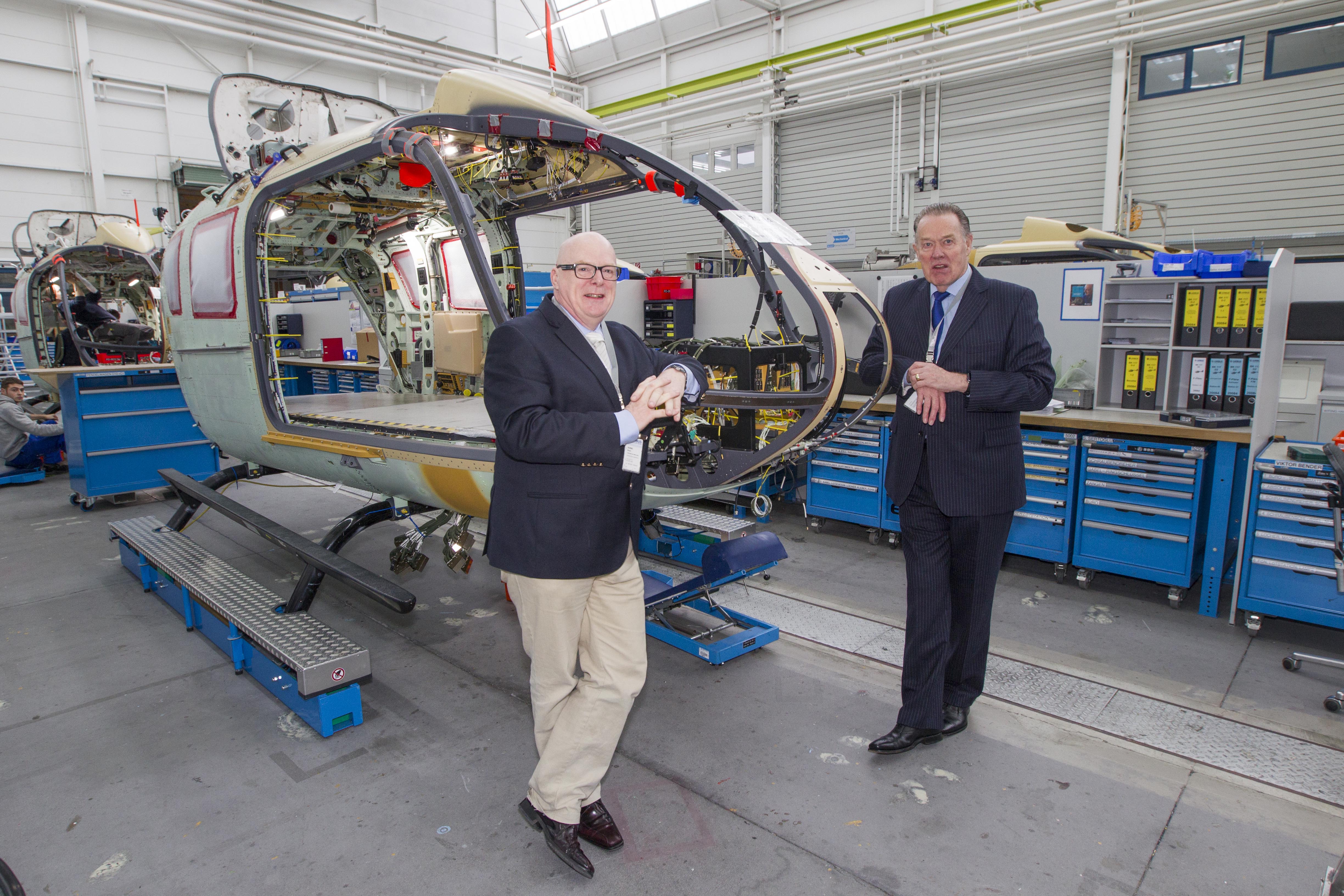 The rapid response emergency service announced the replacement of their oldest MD902 Explorer aircraft, G-SASH in the summer of 2015, however plans for a second Airbus H145 model to replace the other MD902 Explorer G-CEMS have been brought forward.

The announcement comes after the YAA Chairman Peter Sunderland and Vice-Chairman Bruce Burns, recently visited the Airbus factory in Munich to see first-hand the progress of their first new helicopter.  It was at this visit that the purchase of a second new helicopter was negotiated.

Peter Sunderland, Chairman commented “Our visit to Munich proved a great success.  We were fortunate enough to be able to see our first new helicopter on the production line and the progress it is making.  We are very much looking forward to welcoming our new helicopter to the UK later this year to provide the people of Yorkshire with an even better state of the art service.”

Mr Sunderland continues “As part of our Vision of the Future strategy, our long term plan had always been to eventually replace G-CEMS as well as G-SASH.  However, due to diligent cost control, budgeting and the generosity of the people of Yorkshire we have been able to bring forward these replacement plans.  And we are delighted to announce that following discussions with Airbus on our recent trip to their factory, we have confirmed the order of a second H145 model.”

Mr Burns added “We are beginning to see growing number of maintenance issues with our current ageing MD902 Explorers as well as encountering mounting issues with obtaining spare parts.  This is resulting in ever increasing costs of maintaining them both. Over the last couple of years we have encountered record spending on maintenance and this has been one of the major contributing factors in our decision to purchase not just one new helicopter, but two.  Both of the new H145’s will also be night capable enabling us to operate for longer hours which will be a massive benefit for the people of Yorkshire.

After long discussions with Airbus, it was apparent that it would be more cost effective for us to coincide the order of the new helicopters rather than waiting sometime between them.  It also means that we will have a reduced time where we have to operate a mixed fleet.”

Upon its arrival, it will be based from the Charity’s Northern Airbase at RAF Topcliffe, near Thirsk.

The Airbus H145 will offer the YAA an enhanced helicopter experience, providing the latest in flight technology and efficiency.  It is currently used by the police, military and other air rescue services around the world.

Mr Sunderland added “We are extremely excited to welcome the replacement H145’s to our fleet.  The Charity are expecting to see long-term cost savings with the new helicopters as they will be much more operationally reliable.  It has been a long process planning for the replacement of our fleet however we are confident that we have made the right decision for the people of Yorkshire, enabling us to give them the best possible service.”

Medically, it will offer YAA paramedics and doctors a larger cabin area to treat patients in flight, and will carry the latest medical equipment.

The Charity are funding the purchase of the H145’s through prudent, planned savings, grants, careful budgeting and general donations from the public.

Mr Sunderland continues “The Charity have been financially planning for the replacement of the helicopters for a number of years now, however  the additional costs relating to the purchase of the second helicopter are significant.  Therefore, once again the Charity is very much hoping that the generous people of Yorkshire will continue to support the YAA and our Vision of the Future project.   With their support, we will see two state of the art air ambulances serving the people of Yorkshire for the next 25 years.”

The two current YAA helicopters, MD902 Explorers G-SASH and G-CEMS will have a phased retirement once the new H145’s are in operation and will eventually be sold to aid the replacement costs.

Yorkshire Air Ambulance (YAA) still needs to raise £12,000 every single day to keep its two helicopters flying. The charity serves 5million people across Yorkshire, attending on average, more than 1,000 incidents a year – around three every day.