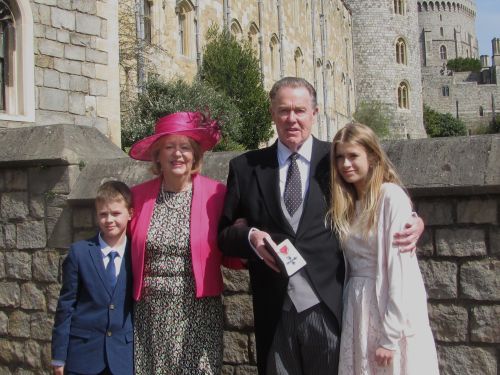 Mr Sunderland, 73, has been a Trustee of the life-saving Charity for over 12 years, with just over 9 of those as its Chairman, and has been responsible for some momentous changes at the YAA in recent years.

Mr Sunderland commented “It was a truly fantastic and overwhelming day at Windsor Castle.  Up until arriving, I had been given no clue as to who would be awarding my MBE, so to find out it was Her Majesty was just wonderful.

The ceremony itself was quite surreal but walking towards The Queen to collect my MBE will certainly go down as one of the most memorable and proudest moments of my life.”

Mr Sunderland joined the YAA after retiring from his role at the RMC Group PLC, where he worked for over 27 years as one of their UK Directors, bringing with him a wealth of experience in senior management, monitoring & delivering of business targets, workshops, strategic development, financial & budgetary control and project implementation.

After spending an initial 3 years as a Trustee for the YAA, he then became Chairman in November 2006, and continues to hold the position today, supported by his Vice-Chairman, Trustees and a strong senior management team.

Mr Sunderland continued “I have been part of the Yorkshire Air Ambulance for over 12 years now and have seen some huge changes to the Charity over those years.  We now own our two current helicopters, with two new brand new replacement state-of-the-art models on order, have two flagship air support units in the region, a fantastic head office facility as well as brilliant paramedics, Pilots and Doctors, Charity team and group of volunteers.  The YAA really is going from strength to strength however none of this would have been possible without the amazing support of the people of Yorkshire.  Something we will always be eternally grateful for.  It truly is an honour to be its Chairman”

As well as his work with the YAA, Mr Sunderland has also been a member of the Wakefield Cathedral Council, and is a past President and Subscribers Secretary of Huddersfield Choral Society.

In 2007 he was appointed a Deputy Lieutenant of West Yorkshire by the Lord-Lieutenant, Dr Ingrid Roscoe.

Mr Sunderland was joined at his investiture by his wife Margaret and his two eldest grandchildren Lillie and Jacob.

He is also supported by sons Richard, Matthew and Nicholas.