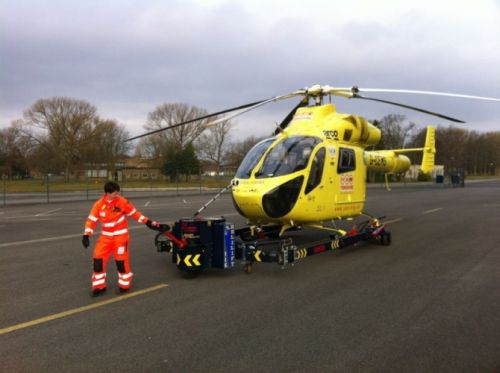 The vital funds, which were donated through their grants program, have been used to help by a state-of-the-art heli lift for the YAA’s new airbase at Nostell Estate near Wakefield.

The heli-lift is a vital piece of equipment for the Charity, allowing the crews to easily move their helicopter from the landing pad to the hangar each evening and morning.

Captain Andy Lister, Chief Pilot of the YAA commented “Our helicopters each weigh around 3 tones (6500lbs) so they are extremely heavy pieces of equipment to move around! Having the use of the new helilift at Nostell allows us to quickly and safely move the aircraft between the hangar and the landing pad.

All our crews have also been fully trained in how to safely use the heli-lift.“

The heli-lift was purchased from Doncaster based TLC Handling.

Captain Lister also added “We would like to extend our thanks to The People’s Postcode Trust for their generous grant of £8,000 which has contributed to us being able to buy this vital piece of equipment. Without support such as this, we would not be able to continue to help to save lives across Yorkshire.”

The revolutionary design of the TLC heli lift has the capability and versatility to handle almost any make or model of skid mounted helicopter without the need for reconfiguration.

The Yorkshire Air Ambulance provides a rapid response emergency service to five million people across the county. As an independent Charity, it does not receive any direct government funding – the only help it does receive is the secondment of its paramedics from the Yorkshire Ambulance Service NHS Trust.

It needs to raise £9,990 every day to keep its two helicopters in the air – that’s the equivalent of £3.6 million a year.