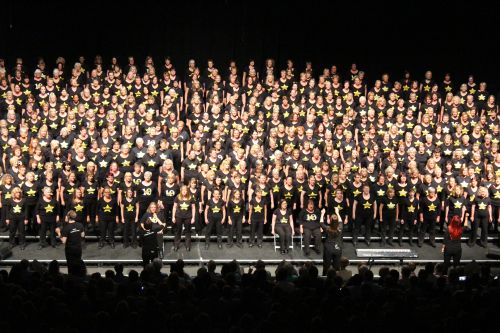 It was the largest act ever to have taken to the stage at York Barbican last Saturday, as nearly 800 Rock Choir members had the audience up on their feet to the sounds of well-known, uplifting classics such as ‘Don’t Stop Me Now’, ‘Rather Be’, ‘Proud’, including a surprise performance by Founder and Director, Caroline Redman Lusher singing Labi Siffre’s ‘Something Inside So Strong’.  The evening was also supporting the Yorkshire Air Ambulance and raised a fantastic £1,120.

York Rock Choir leader, Steve Brown said “All of the hard work that the choir members have put into this event has led to an incredible performance and an amazingly connected audience. I am so very proud to be a part of Rock Choir and know that there will be many more great events happening over the coming years. Huge well done to all that took part, and thank you to those that helped put it all together.”

Community Fundraiser for the Yorkshire Air Ambulance, David Hebden said “We were absolutely delighted to have been chosen as the Charity for this amazing performance.  The choir’s performance was phenomenal and they should all be commended.  The Yorkshire Air Ambulance is an independent Charity which needs to raise £12,000 each day, so we rely on the support of events such as the Rock Choir’s performance to help us raise the vital funds we so desperately need.  We would like to thank everyone at Rock Choir for choosing to support us, and also the audience on the evening for their generous donations.”

Rock Choir is the UK’s largest contemporary choir, with in excess of 23,000 members in over 320 local communities. There are no auditions and no requirements to read music or have any previous singing experience. Rock Choir members get together each week to attend fun, friendly rehearsals where they are taught specially arranged pop, rock and chart songs. There are lots of exciting performances throughout the year and many of them help raise money for charity.

Yorkshire Air Ambulance serves 5 million people across Yorkshire and carries out over 1,250 missions every year. The charity are soon to replace their current ageing helicopters with two, brand new state-of-the-art Airbus H145 helicopters.  These will take to the skies over Yorkshire later this year and in Spring 2017.  The new aircraft – each costing £6m – offer exceptional flight performance and will have significantly lower operational and maintenance costs. The H145 is night capable, enabling longer flying hours, and is used by military, police and air rescue services throughout the world.