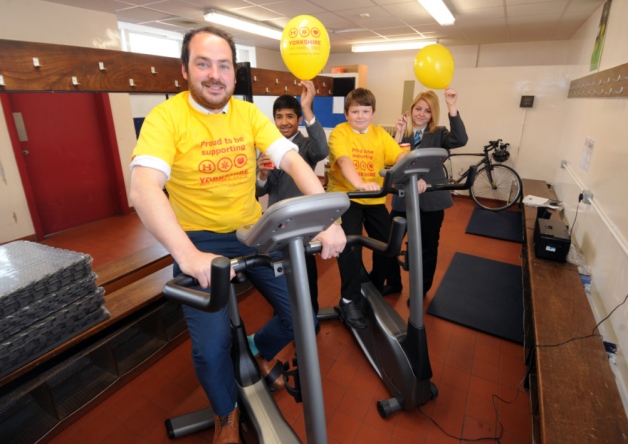 Thousands of people across the county have donned the colour yellow and helped raise thousands for the Yorkshire Air Ambulance.

The Yorkshire Post's Wear It Yellow Day fundraiser yesterday saw over 50 organisations in Yorkshire pledge to spend a day embracing the Tour de France's famous Yellow jersey in aid of the lifesaving charity.

Around 500 pupils at Thornhill Community Academy, from Bafta-winning TV show Educating Yorkshire, and 40 cyclists at Leeds Bradford Airport, who also enjoyed a 'Tour de Runway' cycle race, were among those to take part ahead of tomorrow's Grand Depart.

Tour-tinged celebrations of the world's greatest cycle race even went global, with Hewlett Construction turning both its Leeds head office and its office in Oman yellow for the day.

Nicola Furbisher, The Yorkshire Post's managing editor, said; "We've been overwhelmed by the support for Wear It Yellow Day – it just goes to show how passionate and excited the county is to host the Tour."

With all those wearing yellow donating £1 to the charity, staff from firms such as JLL, Barclays and PxC were among those to help us build a five-figure total.

And as the clock ticks down until Le Tour rolls into action, one Harrogate farm is planning to capture the race by an unlikely source – a flock of sheep.

Five sheep at Harewell Hall farm have been recruited by Sony as sheepcams to show off its AS100VR ActionCam.