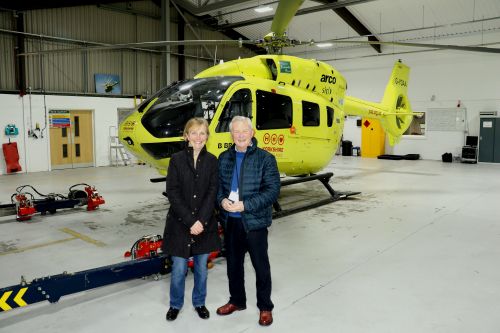 Mike Bevington from Harrogate thought it was a mistake when he got the letter to say he was one of 1,200 members of the public to be invited to the grounds of Windsor Castle on May 19 for the Royal couple’s big day.

The 80-year-old’s name was put forward by the Yorkshire Air Ambulance after requests for deserving nominees were invited by the North Yorkshire Lord Lieutenant’s office.  His nomination recognises more than a decade’s dedicated work as a volunteer for the rapid response emergency Charity.

“I was in such a state of shock when I got the letter I really did think it was a hoax initially,” said Mike who will be taking his wife Cathy to the grounds of Windsor Castle, where they will be able to see the arrival and departure of the bride and groom.

This will be the second time Mike has attended a major Royal event. When he was just 15 years-old he was a member of the Yorkshire Combined Cadet Force contingent which was invited to London to watch the Coronation of Queen Elizabeth.

“About 15 of us went down by train and we stayed in some military barracks where the roof leaked,” said Mike. “We were taken at about 4am to a prime spot on the steps of the Victoria Memorial outside Buckingham Palace.

“The atmosphere was incredible. It is something I will never forget, and I feel so honoured to get the chance to see another great Royal occasion. I am surprised and just so grateful, especially as so many other people are just as deserving.”

Mike, who had a long career in sales before his retirement, joined the Yorkshire Air Ambulance (YAA) as a volunteer when he fully retired ten years ago.

Barry Dodd, Lord Lieutenant of North Yorkshire added: “Mike is a real unsung hero. An outstanding volunteer and an inspiration to any retired person who would like to give their time to a charity of their choice’.

Helen Callear, YAA Regional Fundraising Manager North, said: “Mike is just such a great ambassador for the charity. He is so active giving talks, attending events and collecting donation tins throughout the Harrogate, Nidderdale, Wharfedale and Knaresborough area.

“We did not hesitate to nominate Mike to the Lord Lieutenant’s Office and are delighted that he has been invited.”

Charity workers, schoolchildren, Royal household members and Windsor residents are among the 1,200 members of the public invited to the grounds of Windsor Castle for the wedding of Prince Harry and Meghan Markle on Saturday, May 19.