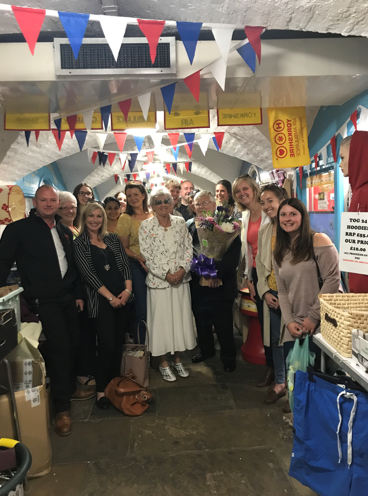 Jean Dixon, 83, has been running businesses from Scarborough market for over 57 years and in 2004, shortly after her retirement, she decided to take on an empty stall and raise money for the Yorkshire Air Ambulance as a volunteer.  She started off in the original market hall with one small stall, and over the years expanded to being a considerable part of the old market hall.  Then after the market hall refurbishment in 2017, Jean and her team relocated downstairs to the market vaults where they’ve been since.

The Yorkshire Air Ambulance shop now consists of two ground floor vaults on the lower ground of Scarborough market, with a dedicated clothing shop selling high-quality fashion donated by dress agencies. Over the last 13 years with help from her dedicated volunteer team through attending various other events, as well as being a public speaker for the Charity, Jean has now raised over £750,000 for the Yorkshire Air Ambulance.

Speaking of her fundraising achievement, Jean said: “When I first joined the Yorkshire Air Ambulance as a volunteer, I set out to raise £1 million and I’m so pleased to have reached the three quarters of a million pound mark.

Over the years I have met some fantastic people and I wouldn’t have been able to reach this milestone without their support.”

Speaking of her fundraising goals for the future, Jean said: “I think that it would take me another four years to achieve my dream total of £1 million and I’m going to try my best to get there.”

Bob Smailes, Yorkshire Air Ambulance Regional Fundraising Manager for North East Yorkshire, said: “We would like to say a huge thank you and congratulate Jean and the volunteers at Scarborough Market for raising an impressive £750,000 for the YAA.

Jean Dixon is one of our longest and most valued volunteers and she is a firm part of the YAA family. We are very proud of her fundraising efforts and we’re proud to have her as part of our team.”

The Yorkshire Air Ambulance shop at Scarborough Market Vaults is open 6 days a week between 9.30am and 4.30pm.  Jean and her team are always looking forward to meeting new supporters when they visit.  If anyone has any donations of items for the YAA shop, please contact the team here: https://www.facebook.com/pg/vaultsyaapage