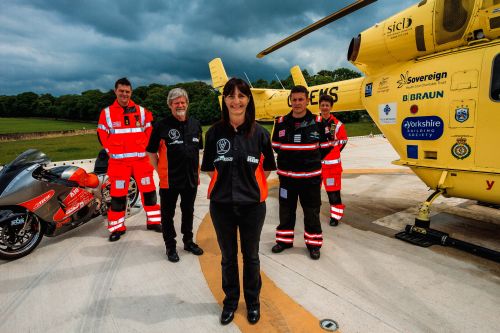 The world’s fastest woman has made a special return to Yorkshire to thank air ambulance medics after surviving a terrifying motorcycle crash at more than 200mph.

Becci Ellis was trying to beat her own land speed record of 264mph at Elvington Airfield, North Yorkshire, last August when the high-speed accident happened. After reaching an astonishing 254mph her powerful turbo-powered bike was hit by a gust of wind sending her veering off the track.

Spectators – including her husband and former racer Mick – watched in horror as Becci’s Suzuki Hayabusa careered out of control for a quarter of a mile before, still travelling at around 90mph, the mother-of-two was thrown off.

Yorkshire Air Ambulance was quickly on scene and airlifted Becci to hospital in Leeds within minutes. Thanks to armour-plating inside her racing suit, the 49-year-old IT analyst miraculously escaped with a broken ankle, severe bruising and whiplash.

After an eight-hour hospital stay, she was trackside at Elvington again the following day to watch other competitors and to help raise money for Yorkshire Air Ambulance.

Becci said: “I had just gone through the speed gate at 254mph when the wind caught me and in less than a second the bike had gone onto the grass.

“I managed to keep the bike upright but I was still doing around 90mph when the bike finally dug into the dirt and I was catapulted off. I don’t remember coming off or hitting the ground, but I landed on my front sliding for about 70 yards and blacked out briefly.

“The air ambulance was called and the paramedics were there very quickly. I was in Leeds hospital fifteen minutes after the crash.”

Becci’s recovery has been painful and slow, but with the help of a sports therapist and the support of her family she is now ready to ride again – although on a completely rebuilt bike.

The mother-of-two from Scunthorpe took the new bike to Yorkshire Air Ambulance’s Nostell Air Base, near Wakefield, to show air crew and paramedics and to thank them.

Becci added: “Mick and I have been collecting for the Air Ambulance for about 12 years and the day after my accident we raised £500.

“The paramedics and pilots are just fantastic and I taking the new bike up was my way of satying thank you for being there for me that day.

“I know, not just from what happened to me, but having seen what they do at events they have definitely save lives. Accidents happen but it is so reassuring to know that we have this amazing service on hand to look after us.”

Becci set her world record of 264mph in October 2014 Elvington Airfield, beating the previous title-holder by more than 20mph. She is considering returning in August to make a further attempt to break her record again.

“I’m having another couple of test and tune days next month and if weather conditions are perfect we aim to get as close to 270mph as possible. But it is totally down to me, I’m not going to put my life at risk for this, it’s not worth it, and I have nothing to prove.”