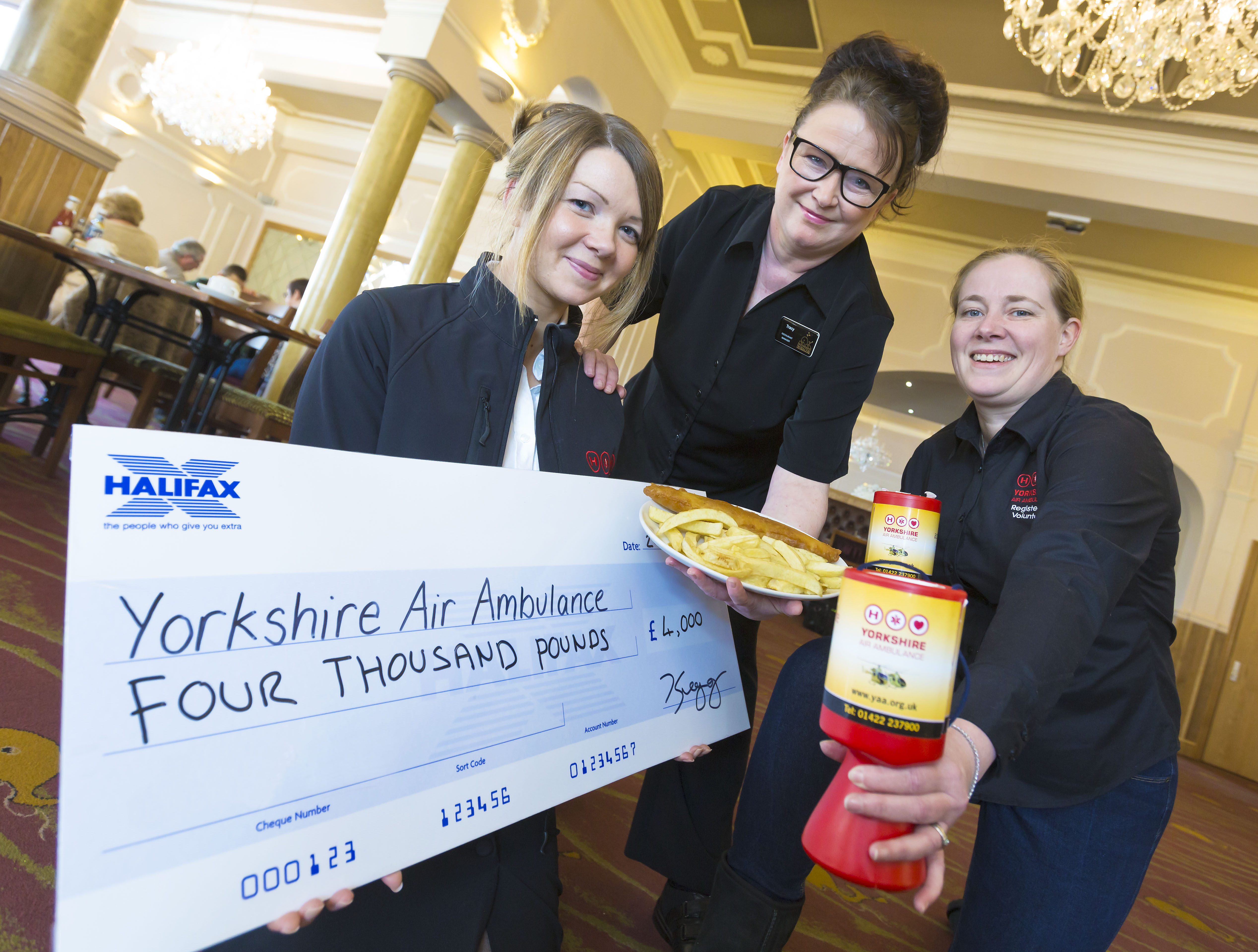 The Wetherby Whaler fish and chip restaurants and takeaways in Yorkshire have raised £4,000 for the Yorkshire Air Ambulance.

Customers at Wetherby Whaler’s five branches across Yorkshire, which are in Guiseley, Pudsey, Wetherby, York and Wakefield, have been donating their loose change to collection tins in the restaurants, which has amounted to the impressive sum.

The cheque was handed over to Kerry Garner, West Yorkshire Regional Fundraiser for the Yorkshire Air Ambulance (YAA) and Carrie Cheeseman, who was rescued by the YAA following a horrific accident in 2009.

Carrie and her two children, Maxwell, now 8, and Scarlett, who was nine-months-old at the time of the accident, were hit by a car near their home in Morley. Carrie was subsequently airlifted to hospital by the charity.

Carrie suffered multiple serious injuries and, in what was already a traumatic year, Carrie’s husband-to-be, Stephen, also had the Yorkshire Air Ambulance called to him when he came off his bike while training for a triathlon – although on that occasion the Charity’s services were not required to transfer him to hospital.

The Wetherby Whaler adopted the Yorkshire Air Ambulance as its chosen charity in 2011 and has since raised nearly £10,000 for the iconic Yorkshire rapid response emergency service through collection tins.

The Yorkshire Air Ambulance is an independent charity that provides a rapid response air emergency service to 5 million people across 4 million acres of Yorkshire. The charity has to raise £9,990 every day, which equates to £3.6 million a year, to keep both of Yorkshire's air ambulances in the air and relies on donations from individuals and organisations to meet this demand.

Phillip Murphy, Owner of The Wetherby Whaler, said: “The Yorkshire Air Ambulance does fantastic life-saving work across Yorkshire, so as a Yorkshire-based business, we thought it was only fitting that we show our support. I’d like to say a big thank you to all of our customers who donated their loose change – it’s amazing how a little can add up and go such a long way.”

Kerry Garner, West Yorkshire Regional Fundraiser for the Yorkshire Air Ambulance, said: “The generosity that we receive from the people and businesses of Yorkshire is the lifeblood of the charity and without this support, we would not be able to provide the service that we are so proud of. We are extremely grateful to the Wetherby Whaler and its customers for the very kind and generous donation.”

Carrie Cheeseman said: “It is fantastic that establishments such as The Wetherby Whaler support The Yorkshire Air Ambulance. I, my husband and our two children are extremely grateful for the charity’s amazing crews and the invaluable work that the YAA does across Yorkshire.”

Tweet
Donate Now
© 2020 Yorkshire Air Ambulance       Privacy Policy   |  Complaints Procedure   |  Sitemap
Website developed by REDROUTE
Top
We use cookies to ensure that we give you the best experience on our website. If you continue to use this site we will assume that you are happy with it.AgreePrivacy policy
COVID-19 UPDATE
Click here to read our COVID-19 statement regarding our return to fundraising activities and associated risk assessments.