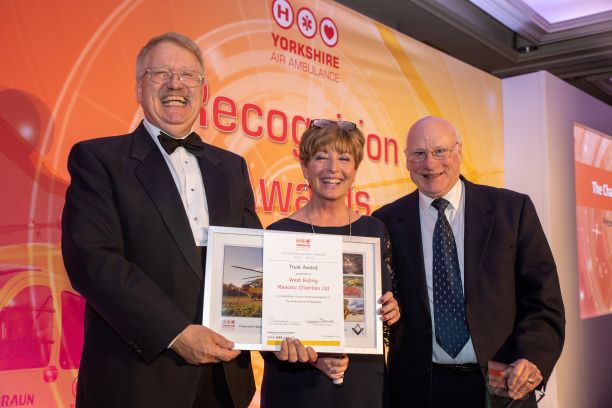 A number of West Yorkshire businesses and fundraisers have been praised at this year’s annual Yorkshire Air Ambulance Recognition Awards.

The Yorkshire Air Ambulance held the event at Oulton Hall in Leeds on the 17th October, celebrating the Yorkshire Businesses and Fundraisers from across the region, who have dedicated their time to raise money for the charity.

West Yorkshire Volunteers of the Year – Brian and Maureen Amos

Brian and Maureen from Wakefield have been very active volunteers for the Yorkshire Air Ambulance for many years. From helping out at YAA events, collecting tins and even organising their own events on their caravan site in Ulroome. Brian and Maureen are always willing to help wherever they can and are great ambassadors for the Yorkshire Air Ambulance.

Brodstock festival is a firm favourite for residents of West Yorkshire and last year over 4,000 tickets were sold in less than an hour, bringing their total to date to over £25,000.

Their club Old Brodleians has also been fantastic supporters of the charity since early 2012 and a very dedicated partner for the Yorkshire Air Ambulance, having raised just shy of £35,000 to date.

Every year the Masonic Charitable Foundation donates one day’s running cost, £12,000, to the Yorkshire Air Ambulance. However last year-the West Riding Masonic Charities Ltd also donated an extra £20,000 to purchase a pair of Night Vision Goggles, which has enabled the charity to extend their flying hours into the night.

The first individual Supporter Award of the evening went to Aire Valley UK, a West Yorkshire based Harley Davidson group with approximately 300 members. Aire Valley have supported the Yorkshire Air Ambulance for a number of years at their rallies across the region, raising nearly £25, 000 for the charity.

The second Individual Support Award went to the Waggon & Horses, a small pub in the village of Fairburn near Selby, who have been supporting the Yorkshire Air Ambulance since 2016.

Each year Laurie Peterson, the landlady of the Waggon & Horses organising a family fun day and last year, the event raised an impressive £7,000 for the Yorkshire Air Ambulance. To date, Laurie and her team have now raised over £20,000.

Managing Director Mark Ward collected the Corporate Supporter Award on behalf of Tog24, a Heckmondwike based company who have been supporting the Yorkshire Air Ambulance for just over 12 months in a very unique way.

In little more than 12 months, the YAA have generated approximately £45,000 from TOG24 items and we are extremely grateful for their support.

UK Asset Resolution, based in Bingley West Yorkshire took home the second West Yorkshire Corporate award. UKAR have supported the charity since 2013 and to date have raised over £50,000.

Each year colleagues of UKAR vote to support a local charity and Yorkshire Air Ambulance has been a long standing favourite.

Through a dedicated charity committee, each year they plan and organise various charity fundraising events from internal office games, to team building, sponsored events and this year they hosted their very own Yellow Yorkshire duck race along the beck which runs by their office. They also share an office block with a separate company called Computer Share who have also been great supporters of the YAA and together they have done many joint fundraising activities

The last of the Corporate Supporter awards went to ADD Express LTD in Elland, who have been offering storage solutions for the Charities merchandise, products and event equipment for a number of years now.  Their support allows bulk merchandise and products to be delivered safely to their warehouse and stored securely.  A vitally crucial support mechanism for the YAA, it was only right A.D.D Express got the recognition they deserved.

Card Factory founder and former Huddersfield Town Chairman Dean Hoyle and his family took home the prestigious Chairman’s Award for their ten year dedication to the Charity and to recognise their £2.2million Pedal for Pounds success through their work through Huddersfield Town Football Club.

Peter Sunderland, Chairman of the Yorkshire Air Ambulance, said: “Dean, Janet and the boys have been truly inspirational in helping to raise a phenomenal amount of money for our charity over the last decade, and helped raise the profile of the Yorkshire Air Ambulance through the highly successful Pedal for Pounds campaign and their work with HTAFC.  Just last week we were delighted to announce that the campaign hit the £2 million mark raised. It was my absolute pleasure therefore to be able to recognise all their hard work with this year’s YAA Chairman’s award.

It is the continued support and generosity from people like the Hoyle’s, which enables us to keep saving lives across not only across Huddersfield but the wider Yorkshire area and we’re proud to have them as part of our Yorkshire Air Ambulance family. ”

Kerry Dwyer, South and West Yorkshire Director of Fundraising, said: “We are delighted to be able to recognise some of the fundraising successes across our region and give back to the people who have worked tirelessly to support the Yorkshire Air Ambulance over the years.  Thank you to everyone who has contributed towards keeping both of Yorkshire Air Ambulance’s flying over Yorkshire, your support has been greatly appreciated.”