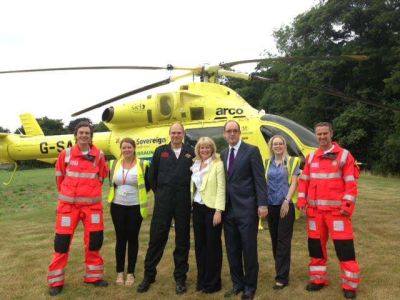 Approximately 4,000 people descended upon the hotel in Pontefract on August 1st to raise money for the Yorkshire Air Ambulance, as well as to celebrate all things Yorkshire.

Crowds basked in the summer sunshine, enjoying food and drink from Yorkshire-based suppliers. Entertainment on the day included a falconry display, a police dog demonstration and a floral show from celebrity florist Carl Wilde.

At midday, The YAA landed one of their Helicopters in the hotel grounds, giving children the opportunity to meet the pilots, sit in the cockpit and have their photo taken.

“It’s the third year running we've held the event and, once again, it’s exceeded our expectations. The weather was perfect and all the entertainment was fantastic. We’d like to thank everybody who attended and helped raise so much money for local charities.”

Kerry Garner, Yorkshire Air Ambulance Regional Fundraiser commented “The annual Yorkshire Day fundraiser at Wentbridge House is now a key event in the YAA calendar and we’d like to thank them very much for choosing to support our charity.

"This year’s event was fantastic and the whole day had a great atmosphere! We were delighted that one of our helicopters was also able to make a visit this year to help reinforce just why it is so important for us to raise the money we need. It costs £9,990 each day to run the charity, and we rely solely on individuals, groups and organisations such as Wentbridge House and its customers to help us raise those vital funds. We’d also like to thank everyone who came along on the day and supported the event.”