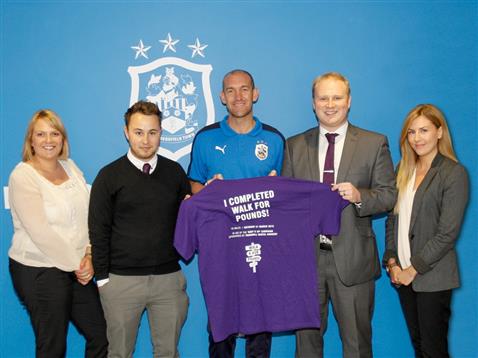 Robyn commented:   “It’s great that the latest Walk for Pounds event has generated such a terrific amount of funds for the Keep It Up campaign, taking the total for the event past £80,000 over the course of four seasons. Thanks and well done to everyone who took part and helped us reach the sponsorship total.

“Six years after the launch of ‘Keep It Up’ in 2009, the success of this event shows that Huddersfield Town fans are being as generous as ever towards the cause. “On behalf of the Club I would also like to thank Andrew, James and the rest of the team at Thornhill Dental Surgery for their sponsorship and for hosting a feed stop during the event!”

Andy from Thornhill Dental Surgery added:   “We're delighted that Walk for Pounds 2015 has raised so much money for the ‘Keep It Up’ campaign. “The YAA is a special organisation because it gives people hope in desperate times. It is a cause that the practice team has a personal gratitude to for assistance they have given to close friends and family members in times of need.

“We are delighted that we were able to be part of such a successful event and wish the campaign long and continued success!”   Any individuals who still have funds to hand in for the ‘Keep It Up’ campaign in 2014/15 must do so by Tuesday 30 June.

Cheques made payable to the ‘Keep It Up’ campaign can be posted FAO Robyn Deegan at PPG Canalside, 509 Leeds Road, Huddersfield, HD2 1YJ. Cash can be handed in at the John Smith’s Stadium Ticket Office.   To donate, please text KIUP99 £5 to 70070 or visitwww.justgiving.com/keepitupcampaign