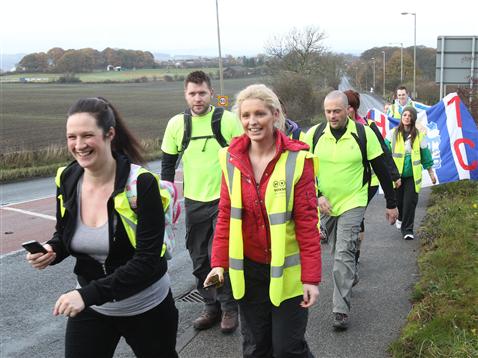 In aid of the ‘Keep it Up’ campaign

Huddersfield Town is happy to announce that the third annual ‘Walk for Pounds’ event has raised an incredible £16,396.17 for the ‘Keep It Up’ campaign!

The walk, which was sponsored by Stotts Coaches, was the third event of its type the Club has organised, with the previous two events to Bury FC in 2011 and Barnsley FC in 2012 raising a combined £43,000 for the campaign.

“I am delighted that the event has raised such a huge sum of money for the campaign; on behalf of the Club and YAA I want to thank all those people who got involved and took part. I would also like to thank the main sponsor, Stotts Coaches for their fantastic backing as well as Orchard Energy, who also supported the event.

“The ‘Keep It Up’ campaign would not be possible without the continued support of Huddersfield Town fans, who since 2009 have raised just over £980,000 in a variety of different ways.”

The next KIU event is the Pedal for Pounds 5: The Chapman Trail bike ride from Arsenal FC to the Stadium between Wednesday 23 April and Saturday 26 April 2014.