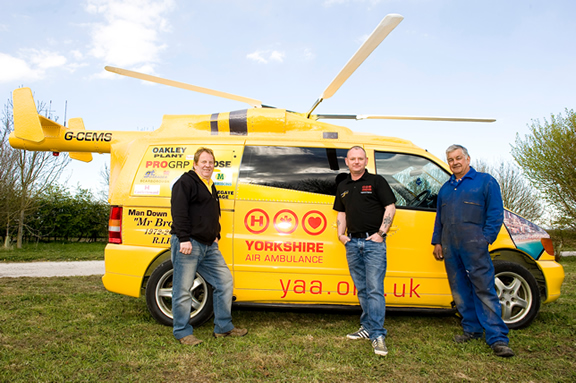 Is it a car? Is it a helicopter? No it’s a ‘helivan’ that will be taking to the roads of England, France and Spain next month.

He will be joining more than 200 cars taking part in this year’s Benidorm or Bust rally from Blackpool to Benidorm with Top Gear-style challenges along the way.

The 1,700-mile route takes drivers over four days from Blackpool to Dover, then from Calais to Poitiers, through Bordeaux and over the Pyrenees to Zaragoza before ending in the popular Costa Blanca resort.

Robert, from Hunmanby, near Filey, is hoping to raise £12,000 for the Yorkshire Air Ambulance (YAA). He said: “I know people who have had to be airlifted to hospital and it is such a great charity providing a life saving service for people in Yorkshire.

“I’ve done the Benidorm or Bust before and it’s a great few days. We’ve spent a lot of hours making a steel frame to go on the roof, the rotor blades and creating the fiberglass helicopter tail. It’s been spray painted yellow and branded up and looks great.”

Robert, 45, has already raised thousands through the sale of raffle tickets to win a new Suzuki Swift car from Scarborough’s GT Garages who have also provided a demo car over the last 10 months to help promote tickets sales and sponsorship.

The HGV and car instructor has now become a registered volunteer for the YAA. He added: “We’ve had so much support from a range of local companies who have given us their services and time free of charge. It’s been incredible and we can’t thank them enough.”

Supporters include Boro Tyres of Scarborough and All Signs in Bridlington and major sponsors include Castle Howard, Sledmere House, Morrisons and Sainsburys.
Robert was helped create the ‘Heli-Heroes’ helivan by team members Mick Hammond, Howard Cowton and Jeremy Brambles.

They will be joined on the Benidorm or Bust start-line on May 6 by three other cars raising money for the Yorkshire Air Ambulance. They include Vicky Turner and dairy farmer Mark Stephenson from Old Malton who will be driving Daisy the Robin Reliant – AKA Mad Cow.

Tweet
Donate Now
© 2020 Yorkshire Air Ambulance       Privacy Policy   |  Complaints Procedure   |  Sitemap
Website developed by REDROUTE
Top
We use cookies to ensure that we give you the best experience on our website. If you continue to use this site we will assume that you are happy with it.AgreePrivacy policy
COVID-19 UPDATE
Click here to read our COVID-19 statement regarding our return to fundraising activities and associated risk assessments.