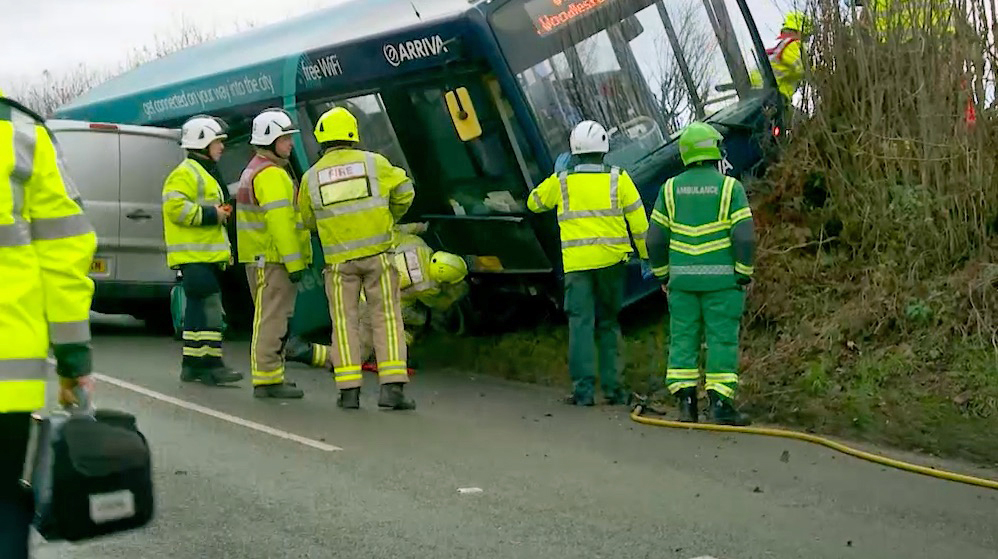 The rescue of a bus driver who collapsed at the wheel of his shopper’s special to Wetherby features in this week’s episode of Helicopter ER – the UKTV series that follows the life-saving work of Yorkshire Air Ambulance.

Ian Batty, 56, was driving the Arriva service between Wakefield and Wetherby when he passed out near the village of Barwick-in-Elmet.

His bus mounted an embankment before coming to a halt. But, thanks to a passing van driver who placed his vehicle by the side of the bus, all passengers were able to get out safely with only a few minor cuts and bruises.

Both Yorkshire Air Ambulance helicopters were dispatched to the scene and joined emergency services who rescued Ian from his cab.

“It all happened right out of the blue,” said Ian from Stanley, Wakefield. “I had had no signs or symptoms that anything was wrong but, basically, I just went very light headed.

“I thought I am going to have to stop the bus and I was apparently pressing the brake pedal when I passed out.”

Ian, who has been a bus driver for 10 years, was only concerned for his passengers when he came round. The father-of-two was airlifted to Leeds General Infirmary and tests later revealed an undiagnosed heart condition which has now been treated with the fitting of a pacemaker.

Ian, who is now fully fit and back at work, has nothing but praise for Yorkshire Air Ambulance, a charity that is close to his heart already as son Chris is a volunteer for the rapid response emergency service.

He added: “We run bus services out to The Dales on a Sunday and Bank Holidays which quite often take serious walkers and I hold collections twice a year for the Air Ambulance, thinking these are the people who are likely to need the service.

“I never imagined that I would ever need to be airlifted to hospital and I am just very grateful. They are a fantastic service and are very much our family charity now.”

Ian’s accident, which happened last December, features in tonight’s episode of Helicopter ER at 9pm on Really or on catch-up on UKTV Play (uktvplay.co.uk)

The episode also features a holidaying cyclist who collided with a sheep and a motorcyclist who suffered an horrific leg injury after coming off his bike.