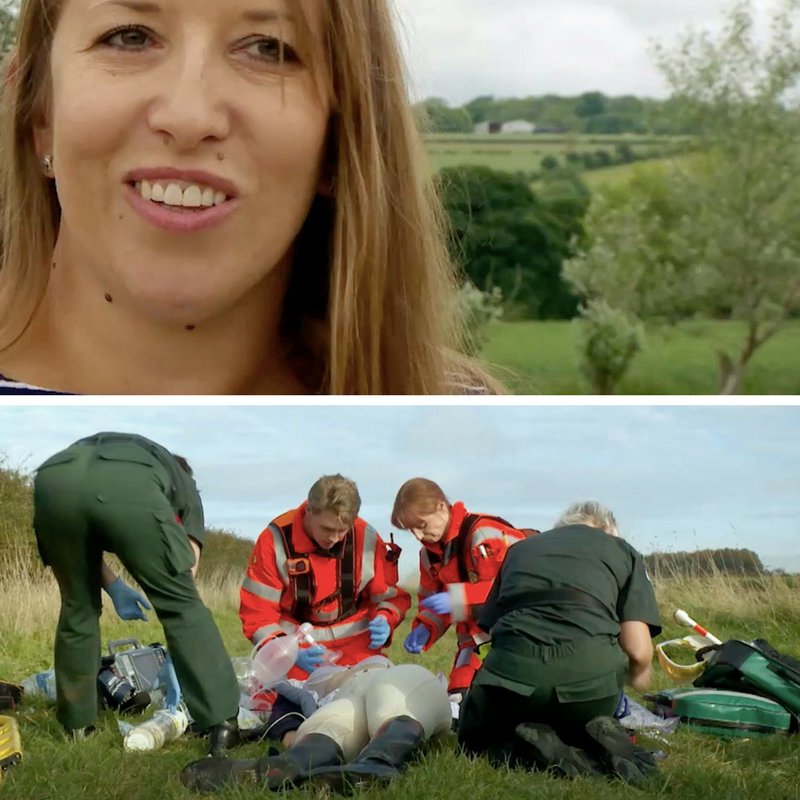 Emily Thurgood was riding in a field on the edge of the North Yorkshire Moors when her horse slipped. She came off landing on the back of her head, the impact resulting in a blood clot which subsequently caused a stroke.

When the Yorkshire Air Ambulance crew arrived, the 40-year-old experienced rider was deeply unconscious, with her jaw clenched shut making it very difficult to get air into her lungs.

A second air ambulance carrying a doctor was dispatched so that Emily could be anaethetised before being airlifted, however paramedics at the scene decided they needed to get their critically injured patient to hospital as soon as possible.

She was flown the 30 miles to the nearest major trauma centre at James Cook University Hospital, Middlesbrough, in minutes – a decision which Emily believes saved her life.

“Although I had a very good riding helmet, I landed on the back of my head which shunted my brain forward.  This is where the speech and memory is and where most of the damage was caused by the stroke,” she said.

“It was a really freak accident but without Yorkshire Air Ambulance I would not be here now. It’s as simple as that and I am so grateful to them.”

Emily was kept in an induced coma for a week and spent nearly 10 weeks in hospital, going through intense neuro rehabilitation and physiotherapy.

“I woke up in hospital and couldn’t move any of my right side because of the stroke,” said Emily from Ebberston, near Pickering.

“I had no idea of where I was, who I was or what had happened, which was scary for me but even scarier for my family.

“I went through a lot of rehabilitation and physiotherapy, learning to do everything again – from walking and talking to cooking.

“I still struggle with finding the right words sometimes and my memory and writing are not great. I still can’t run and, what is really frustrating, I’ve not been able to ride, but I am getting better each month.”

Emily’s determination to get back to full physical and mental fitness is amazing doctors who say she should make a full recovery over time.

The Marketing Effectiveness Manager for HSBC based in Leeds will start a phased return to work in January and is also planning her wedding after getting engaged to partner Richard earlier this year.

Emily is also going to fund raise for the Yorkshire Air Ambulance charity that saved her life. “As a horse rider living where we do, I know other people who have been airlifted to hospital by them.

“If I had not been flown to Middlesbrough so quickly who knows if I would have survived, or if I would be making such a good recovery.

“I have been told I will get completely back to where I was before the accident but it could take up to five years. Considering what happened, though, I think I have been pretty lucky and I can’t thank Yorkshire Air Ambulance enough.”

Emily’s dramatic rescue can be seen in this week’s episode of Helicopter ER – the UKTV series that follows the life-saving work of Yorkshire Air Ambulance.

The programme also features a freak farming accident which leaves a nail embedded in the eye of a North Yorkshire farmer, and a morning commute that nearly ended in tragedy for a young motorcyclist.