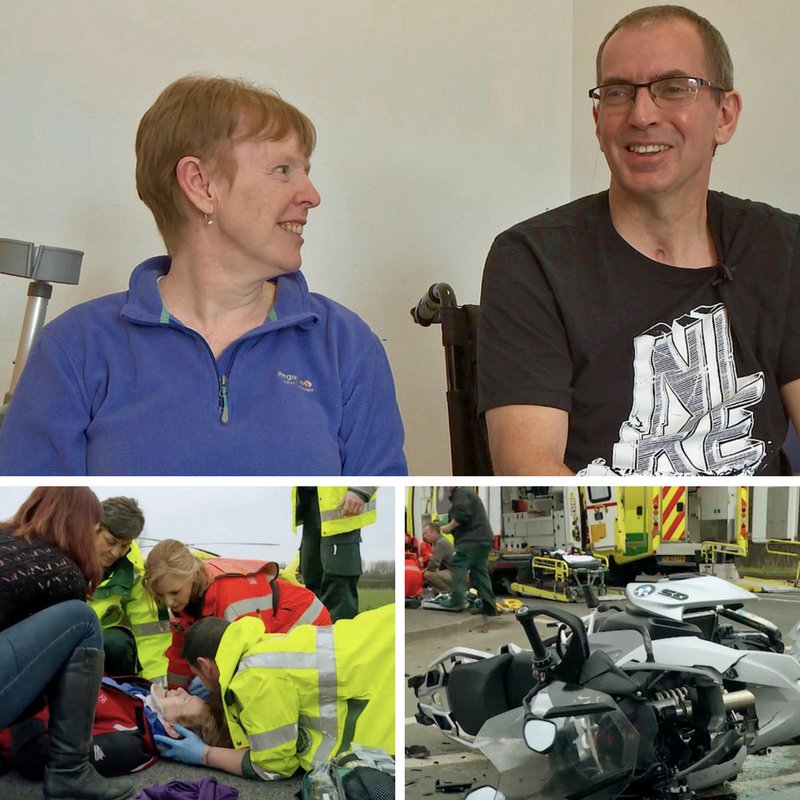 The 53-year-old surveyor suffered multiple fractures including a broken hip, two vertebrae, most of his ribs and neck. He semi-severed his spinal cord, suffered collapsed lungs and a bleed on the brain.

Karen, a cardiac technician at Pinderfields Hospital, Wakefield, was catapulted over 20ft down the road and suffered pelvic fractures and snapped ligaments in her right knee.

Fortunately, an off-duty hospital consultant and a nurse stopped to help at the scene. Yorkshire Air Ambulance paramedics stabilized the couple before Adrian was airlifted to Leeds General Infirmary where he spent six weeks – four of which in intensive care.

Adrian was then transferred to the regional spinal injuries unit at Pinderfields where the he spent a further five months undergoing intensive rehabilitation and physiotherapy.

He said: “Most things have healed but my spinal injury means that I don’t have much movement in my left leg and very little control of my right leg below the knee so at the moment I need a wheelchair to get around.

“I can stand up using a frame and what movement I do have is getting stronger, but I have very little feeling in either leg and it’s about finding new ways of doing things that I just used to take for granted.

“I don’t know how much movement I will eventually get back but we’ve just come back from a holiday and I was able to walk across the swimming pool which was amazing.”

The couple’s lives have been totally changed following the accident which happened in March. They have both undergone several operations, are still having physiotherapy and have had to move into a rented bungalow in Kirk Smeaton which is wheelchair accessible.

Karen, 54, is hoping to go back to work in the New Year. Although Adrian is unable to return to the job and motor-biking hobby he loved he is still able to follow his other passion – playing the trombone.

Adrian is a member of the famous Black Dyke Brass Band and has also travelled the country as one quarter of the Black Dyke Trombone Quartet.

“I’m not sure if I will be able to get back to the standard I was but I am getting there and hope to make a couple of concerts with the bands in the near future,” he added.

The Black Dyke Trombone Quartet performed a fundraising concert for the Yorkshire Air Ambulance last week and friends and work colleagues of the couple have also raised over £2,000 so far for the rapid response emergency charity that saved Adrian’s life.

The doting grandfather added: “I don’t think I would have made it without the Yorkshire Air Ambulance. I was at the lowest level of consciousness, both sides of my chest were deflated during the flight, and I got to hospital in the nick of time.

“It would have been at least another 20 minutes by road and I am just so grateful and glad that we have the Yorkshire Air Ambulance.”

Adrian’ and Karen’s dramatic rescue can be seen in this week’s episode of Helicopter ER – the UKTV series that follows the life-saving work of Yorkshire Air Ambulance.

The programme also features a three-year-old bitten by the family dog and a chauffeur-driven journey that ends with a helicopter flight to hospital.

The Yorkshire Air Ambulance (YAA) serves 5million people across Yorkshire and carries out over 1,250 missions every year. The charity needs to raise £12,000 every day to keep saving lives.