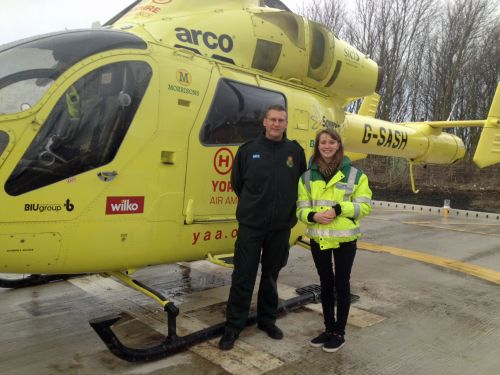 A North Yorkshire teenager who broke her back in a head-on car crash has raised over £2,000 to say thank-you to the air ambulance crew that rescued her.

Natasha Sedgwick was driving to Richmond Six Form College on a summer morning last July when a Mercedes van came round a blind corner on the wrong side of the road and hit her car head-on.

“The car was pushed up onto a high verge and then bounced back so I was jolted around a lot,” said Natasha of Street Lane, Pickhill. “I knew it was bad because I was in a lot of pain.

“I saw smoke coming from the front of the car and wanted to get out but I couldn’t and had to be cut out by firemen – I just remember being surrounded by lots of firemen.”

Natasha, 18, was flown by Yorkshire Air Ambulance to the James Cook Memorial Hospital, Middlesbrough, where she was found to have broken her back and four ribs.

“The crew were just fabulous, kept me smiling and I couldn’t believe how quick the flight was,” she added. “My Mum and sister drove to the hospital and said how strange it was to see the air ambulance fly past knowing I was in it.

“I got the chance to go to the air ambulance base and meet the crew to say thank you and they thought I would be arriving in a wheelchair, which made me realise how fortunate I’ve been.”

To say thank-you to the helicopter heroes, Natasha swam 100 lengths of Bedale Swimming Pool in a remarkable sponsored challenge that has so raised over £2,000 for the rapid response emergency charity.

Natasha, who used to be a keen basketball player, went through months of treatment and physiotherapy and had to wear a backboard everyday for six months.

But showing great determination, she returned to College to complete her A levels and has just started work as a receptionist with an architectural practice.

This has forced Natasha to get behind wheel of a car again: “That has been the hardest thing, it was like learning to drive all over again,” she added.

“It’s been a really tough year and I was quite down at times but my Mum and family have been great and I’ve learnt to be positive and the accident has really changed my attitude to life.”