Super Mum knits her thanks to air ambulance charity 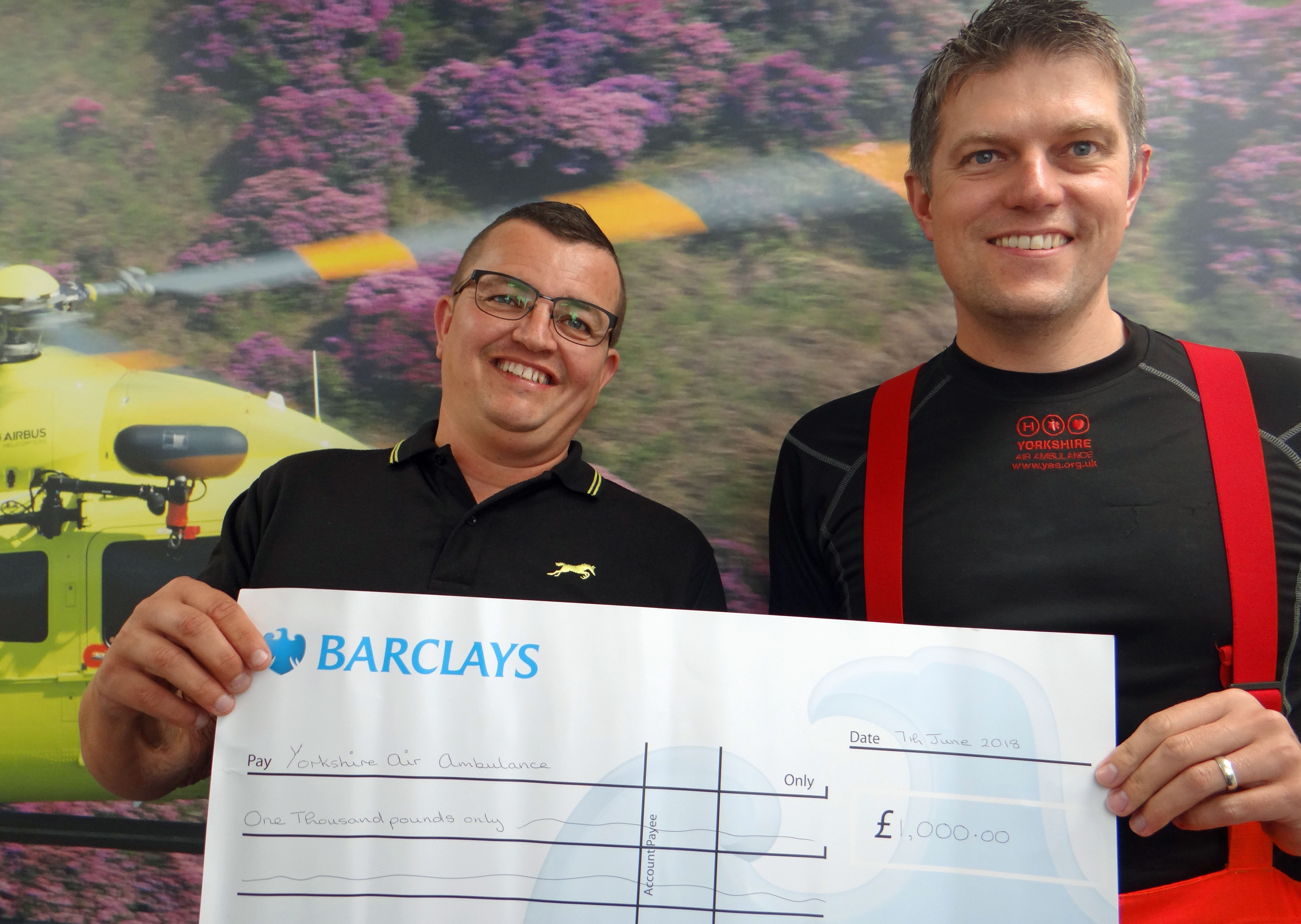 Super Mum Barbara Gardner is knitting her thanks to the Yorkshire Air Ambulance crew that helped save her son’s life after a freak accident.

The 65-year-old from Kirk Ella, Hull, has sold hundreds of knitted baby clothes and soft toys to reach the £1,000 mark of her £4,000 fund raising target for the rapid response emergency charity.

Her son Steven Turner’s arm was badly crushed when his articulated lorry was blown over in strong winds on the A64 by the Bramham Park roundabout, near Leeds, in November, 2015.

“I was taking a full, 43-and-a-half ton wagon from Durham to Leeds and was just coming off the A1 to join the A64 at Bramham Roundabout when a strong gust of wind hit the curtains on the side which created a sail effect,” said Steven from Burstwick, East Yorkshire.

“It took about eight seconds to blow the lorry over with my cab the last to go. We landed on the central reservation and my head hit the driver’s door window which broke and my arm went out and got trapped under the wagon.”

The 42-year-old experienced driver suffered major blood loss and multiple trauma injuries and emergency services on the scene fighting to free him and get him to hospital had little hope that Steven’s life – let alone his arm – could be saved.

However, he and his grateful Mum firmly believe the actions of Yorkshire Air Ambulance paramedic Matt Syrat made all the difference.

“I told Matt I had had some pins and needles in my arm and so he did everything he could to save it. He got a tourniquet round the top of my arm and shoulder to control the bleeding,” added Steven.

With worsening winds making it incredibly difficult to fly Steven to the major trauma centre at Leeds General Hospital, Matt went with him by land ambulance where surgeons battled to save his shattered arm in a 12-hour operation.

“I had 300 stitches and it looked like I had a Wolverine hand as everything had just exploded,” added Steven who has had a total of 28 hours of surgery and many hours of physiotherapy over two years to rebuild his arm and create a fully functioning hand.

“It’s been hard and I went through some dark phases but I’ve got a very strong team around me and I’ve managed to get myself fit again and back working driving oil tankers.”

Barbara, a retired IT lecturer and trainer, said: “Yorkshire Air Ambulance is not a service you ever thing you will need but thank God it is there. If the paramedics had not got there as quickly as they did, and took the actions they did, it would have been a very different story.

“When your son has been that near to death and the air ambulance service that saved him relies solely on donations then I felt I had to raise the £4,000 cost of the call-out.

“I love knitting and sell mainly baby clothes and soft toys – many under £5 – but it’s just my way of showing my appreciation and is the least I can do.”

Barbara has sold hundreds knitted items mainly through craft fairs and customers ordering items from the wool section of the local Post Office in Anlaby, where she works part-time.

The 65-year-old is hoping to sell many more, and get donations for the YAA, during the two-day British Wool Show in York next month where she has been given a stall.

Barbara and Steven visited Yorkshire Air Ambulance’s air support unit at Nostell to hand over a cheque for £1,000 and meet their paramedic hero Matt.

Steven added: “He did not know I had survived and it was just really good to be able to look him the eye and say thank-you.”

Matt Syrat, Aircrew Paramedic added “It was a pleasure to meet Steven and Barbara again after such a significant accident.  I remember Steven’s incident vividly and glad myself and my colleagues on the helicopter that day were able to do all we could to help save Steven’s arm.

“It’s great to see how well he is doing now.  And we are so grateful to Barbara for her amazing fundraising efforts – all that knitting must keep her very busy!”