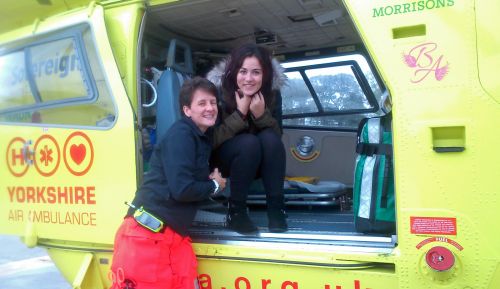 A Sheffield student who was seriously injured in an horrific motorbike accident is urging everyone in South Yorkshire to support a special fundraising campaign this month for the Yorkshire Air Ambulance.

Shona, from Lodge Moor, said: “Quite simply if it wasn’t for the air ambulance and the brilliant paramedics I would not have made it.

“They were there so quickly, and got me to the trauma centre within minutes and I can’t thank them enough for what they did for me and what they do every week for people across Yorkshire.”

Motobike-mad Shona was riding with a friend to Escrick, near York, to make her debut at the popular Yorkshire Pudding Rally when the accident happened.

“A lorry infront flashed a guy out from a layby who decided to do a U-turn instead of joining the traffic flow. I was only doing about 30 to 35mph but had no time at all to put my brakes on or get out of the way. I went straight into the driver’s door. When the air ambulance arrived the bike was still stuck in the door.”

After three weeks in hospital the courageous student began her long recovery at home with a metal frame pinning her shattered pelvic bones together. That has now come out and with physiotherapy and determination Shona is gradually recovering.

To say thank-you to the helicopter heroes who saved her life, Shona organised a charity bike night at the MotoDemon Speed Shop in Rotherham, which raised nearly £700 for the rapid response emergency charity.

With further donations from family and friends that figure is now £900 and Shona is urging people across South Yorkshire to back the 175 Challenge.

Organisations including businesses, schools and football clubs have signed up to raise at least £175 in 175 hours between November 8 and 15.

The challenge forms part of a fundraising campaign launched by Sheffield-based healthcare company B. Braun Medical – celebrating 175 years in business – for the Yorkshire Air Ambulance.