Steve flies into sunset after 10 years as Air Ambulance Pilot 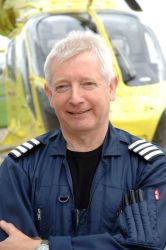 The pilot who flew BBC presenter Richard Hammond to hospital after his horror high-speed crash has retired after a decade as a Pilot for the Yorkshire Air Ambulance.

Capt Steve Cobb has flown hundreds of missions for the rapid response emergency charity, many as its Chief Pilot in his ten years – but none as high profile as the 2006 rescue of the Top Gear host who was fighting for his life after sustaining serious head injuries in a 280mph jet car crash at Elvington Airfield.

The father-of-two went on to make a full recovery, in large part because of the speed he was transferred to Leeds General Infirmary.

Steve, 59, said: “The Richard Hammond incident was certainly the one that generated the most interest, although it was actually one of the easiest jobs I’ve done.

“But landing on that airfield ended up being one the biggest events that happened for the Yorkshire Air Ambulance – leading to enough money being raised to put a deposit down to fund our second helicopter G-CEMS.”

His flying career got off the ground by chance in 1986 when Steve – who was enjoying a successful career in contract IT – spotted a roadside advert for a helicopter trial lesson.

“I really enjoyed the lesson and after getting my private license I spent the next five years as a self improver, building up enough flying time to be able to fly commercially – working three months in IT and then a month flying.”

Steve got his commercial license in 1992 and, after three years of working on the ground during the winter and in the air during the summer, became a full-time charter pilot in 1995, based nearby to Leeds Bradford Airport.

“It was really busy, a time when there was a lot of money around and we were flying businessmen and wealthy people to major sporting events, weddings and functions,” added Steve, who worked for Northern Helicopters and then Helijet.

“We also did a lot of aerial filming for TV – including the opening credits for Emmerdale – and would rapidly transport components for car companies using just in time production.

“I really enjoyed the work, you never knew what was coming in from one day to the other.”

His move into emergency service flying again came by chance, after the Yorkshire Air Ambulance helicopter landed at Steve’s heliport on a mission.

“I got chatting to the pilot and about a week later saw an advert for an emergency service pilot for the North of England. It was for the police in Newcastle but was then told they also needed a contract pilot in Yorkshire.

“I started doing ten days a month for the Yorkshire Air Ambulance. Because I’d always flown out of Leeds I knew the area really well and because I’d done a lot of aerial photography work I was very used to flying the aircraft at the right speed and height.

“It becomes almost second nature, you can hear and feel the aircraft, so you can then concentrate on finding the right landing spot, making sure the crew can get to the job quickly and safely.”

Steve was appointed Chief Pilot in 2005 and has since flown to hundreds of incidents across the county – landing everywhere from busy motorways to remote hilltops, seaside cliffs to industrial estates.

“We are part of a close team and we each respect each other’s roles within that team – when the jobs come in, so you have to be very professional and not push the limits.

“You can pick someone up who seems fine and the next day hear that they have passed away, and then someone else who’s future doesn’t look promising and without a chance, comes through.

“I remember one of the first jobs I went to was a girl who had been in a phone box when a car came off the road and smashed into it. The scene was chaotic, and they were carrying her on the door which was all that was left of the phone box. She had just a broken nose. It was incredible.

“I thought it would be hard seeing people badly injured, but it is amazing to work with such fantastic paramedics and people on the ground are always very pleased to see us. This job is literally the best single thing you can do with a helicopter.

“It’s been amazing meeting those people who want to come back and say ‘thank you’ for what we’ve done for them – people are so grateful for what the air ambulance does and it has been very special to work for a charity that is so appreciated and valued.”

Steve who recently moved to Scarborough, is now enjoying his retirement with wife Christine walking and cycling on the Yorkshire coast. Steve also hopes to have the time to restore Lambretta scooters and a VW camper van.

He added: “The over-riding thing that sticks with you from the job is how quickly your life can change. One minute you’re doing something completely normal and the next, because of something out of the ordinary it can be over. It certainly makes you appreciate life.”