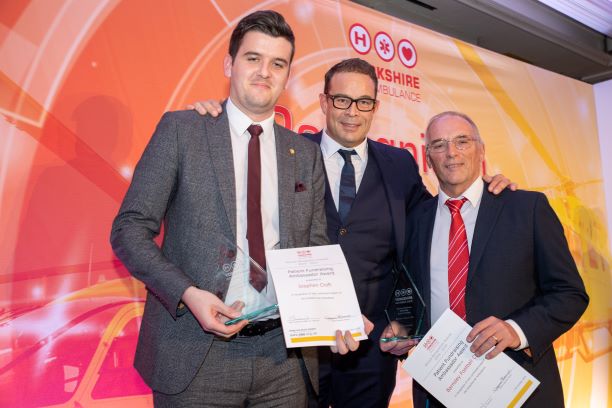 The Yorkshire Air Ambulance held their annual Recognition Awards at Oulton Hall in Leeds on the 17th October, celebrating Yorkshire Businesses and Fundraisers from across the region, who have dedicated their time to raise money for the charity.

Stephen was airlifted from the Club in September 2018 following a cardiac arrest he experienced whilst volunteering pitch side for the Barnsley vs Burton Albion game.

The Yorkshire Air Ambulance landed on the pitch in front of 11,000 people and managed to resuscitate him, before airlifting Stephen to Sheffield Northern General Hospital for further treatment.

A year after his cardiac arrest, through the work Stephen and his family have done with Barnsley Football Club, they have raised almost £14,000 for the Yorkshire Air Ambulance and the total is still rising.

Stephen has also inspired many local organisations and companies to support the Yorkshire Air Ambulance, as well becoming a registered volunteer for the Charity, along with his wife, daughter and two friends. Through his connections with the club and his volunteering, Stephen is working to promote the work of the Charity to the people of South Yorkshire.

Speaking of his award, Stephen said: “I was very pleased and honoured to be nominated for this award. I have a lot of people to be grateful to for not only saving my life, but supporting me afterwards and helping to raise the funds and raise awareness for the air ambulance. I am eternally grateful and look forward to a long and successful time volunteering”.

Head of Marketing and Barnsley Football Club, Andrew Clark added, “The reaction of the Yorkshire Air Ambulance was integral to the saving of Steve’s life and it’s clear that the Barnsley FC family recognised that. The figure raised is testament to the generosity of our supporters and the wider footballing community, and there is  no doubt that the Club will continue to work alongside Steve and the Yorkshire Air Ambulance over the course of this campaign.”

We would also like to extend our thank you to the staff and fans of Barnsley FC for their continued support and generosity, which has helped spread the word about the Yorkshire Air Ambulance in the South Yorkshire region.”