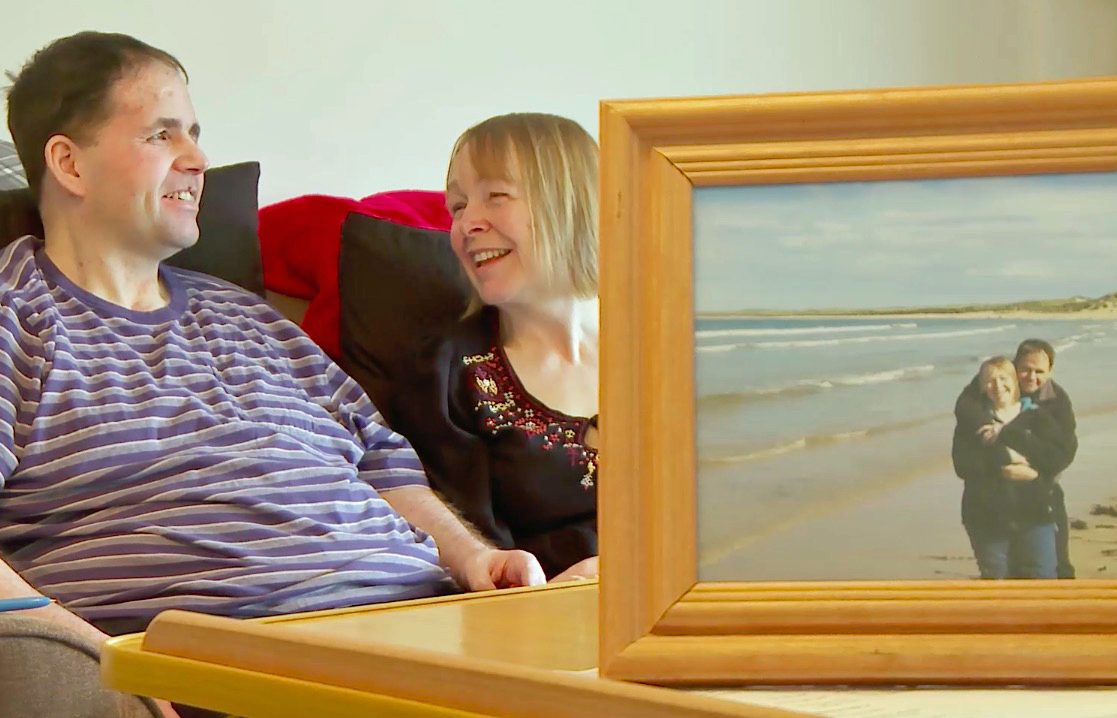 The love of his partner and a sense of humour are helping Alan Brigg slowly rebuild his life after suffering a catastrophic brain injury in a motorbike accident.

Alan and five friends were returning from a regular morning bike ride to Penrith on Easter Saturday last year when he was hit by a Land Rover pulling out onto the A65 near Ingleton.

The impact caused devastating injuries which have completely changed Alan’s life, but he might not have survived at all without an off-duty intensive care nurse who got out of her car to help and gave CPR after Alan’s heart stopped.

Yorkshire Air Ambulance were quickly on scene with paramedics and Emergency Medicine Consultant Dr Chris Srinivasan who anaethetised Alan at the roadside before airlifting him to the nearest major trauma centre at Preston.

Alan suffered multiple fractures including a broken pelvis, elbow, 10 broken ribs, collapsed lung and a spinal break but the devastating damage was to the 42-year-old’s brain.

He spent a total of 11 months in hospital in Preston and Airedale before moving into a bungalow in Skipton with his partner of five years, Sue McIntyre.

Sue made the nearly 160-mile round trip every day for 17 weeks to visit Alan in the Royal Preston Hospital and is with him every step of the way on his long road to recovery.

Something not lost on Alan, who proposed to her up to 70 times a day after the accident – and she said yes every time!

“What’s happened is just so huge and scary. I didn’t know a thing about brain injuries before but I’ve had a lot of support and Alan has come such a long way,” said Sue, 51 who works in Asda at Shipley.

“His short-term memory is still very bad and some of the longer-term memories are mixed up but he is slowly improving and the main thing he has the same personality, and sense of humour, although he’s a lot more soppy!”

Alan who has ongoing physiotherapy and neuropsychology support, has been left wheelchair bound, and although he is now able to walk a few steps with a frame, his immobility has been hard for both him and Sue, who were avid walkers before the accident.

She added: “We were just never in. Every weekend we were out hiking or cycling and so not being active has obviously been very frustrating for Alan.

“But, we hope he will have a degree of mobility and we’re getting an off-road wheelchair which will be fantastic.”

Alan was working as a Spares Coordinator at Spiroflow UK, Clitheroe, when the accident happened. His former work colleagues raised nearly £1,000 to support his rehabilitation and motorbiking friend Lee Boocock – who was riding with Alan last Easter – is aiming to cycle from Leeds to London next month to raise money for the Yorkshire Air Ambulance.

Sue added: “We have spoken about his accident and we are just so grateful to the nurse who gave him CPR and the Air Ambulance doctor and paramedics who kept him alive and got him so quickly to hospital.

“I’ve watched the TV programmes and you just never think one day it could be you. We are just so fortunate to have an Air Ambulance service and if Alan had had to go by road ambulance I don’t think he would be here today.”

Helicopter ER, which airs at 9pm on Really, is made by York-based Air Television who have won two Royal Television Society awards for their work on the compelling series. You can catch up with any episodes you miss on UKTV Play.

If you would like to donate to Lee Boocock’s Just Giving page go to: https://www.justgiving.com/fundraising/lee-boocock1